105 Passengers who boarded an Air Peace aircraft, escaped death this Monday as the tyre of the aircraft, a Boeing 737 exploded at the Murtala Muhammed Airport, Lagos. 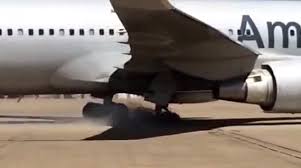 The tyre incident which occurred by 11a.m today, forced the pilot to abort the flight, as
the passengers who were travelling from Lagos to Abuja were transferred to another aircraft.

When contacted, the General Manager, Public Relations, Nigerian Civil Aviation Authority, Mr Sam Adurogboye, said he was yet to confirm if the incident had been filed with the regulatory authority.

However, the spokesman of the airline who released a press statement to newsmen, disclosed that apart from the tyre burst, no serious damage was done to the aircraft.

“The incident happened around 11am as the aircraft was about to take off. The pilot immediately turned around and the passengers were disembarked.

“Another aircraft was provided for them and I can confirm to you that they arrived in Abuja safely a few hours ago.”

Xenophobia: Govt gives N20,000 each to 2nd batch of returnees, reveals next action

#RIP…Former Manchester United midfielder, Liam Miller has died at the age of 36 from cancer!

How we plan to cripple Nigeria, if Nnamdi Kanu is not released in 7 days – MASSOB