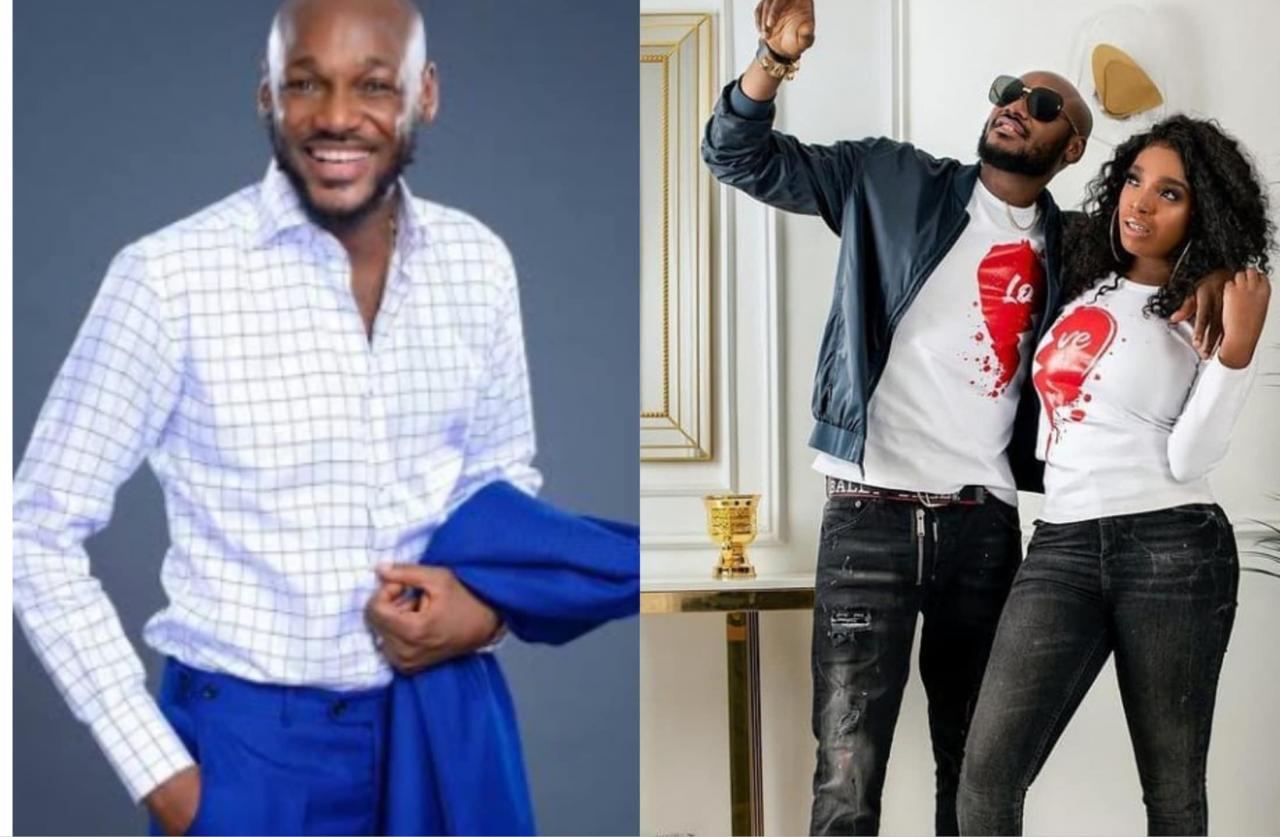 Legendary singer Innocent Idibia better known as 2face Idibia or 2baba Idibia has finally spoken out on reports of him having another child. 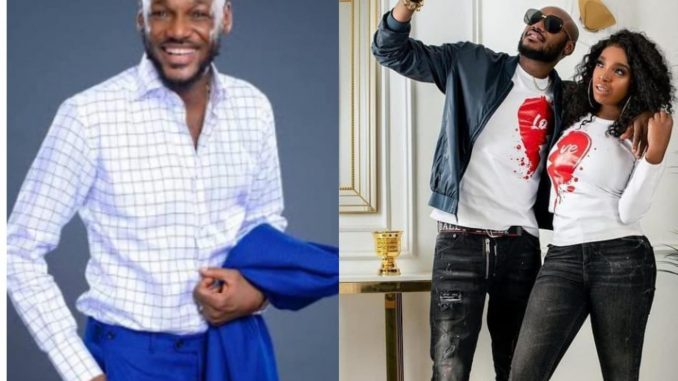 NB reported that the singer stirred pregnancy rumours when he tendered an apology to his wife for his behaviour over the years.

2face Idibia had tendered a public apology to his wife, Annie Idibia, for hurting her for the umpteenth time.

Sharing a video of Annie in bed on his Instagram page, 2face Idibia wrote, “Forever Grateful go u @annieidibia1 Love u till I die…U kind is rare #GRATEFUL to u forever. Sorry, I messed it all up.”

In another lengthy post, he apologized for all the embarrassment he had caused his wife, his kids, his mother, and all his families and management.

He, however, made it clear that he wasn’t looking for sympathy nor trying to make himself look good as it is no reverse psychology.

He admitted that he had been a shitty father, husband, and baby daddy and had no excuses for that.

2face added that he was just returning to his default setting, denouncing his role model status and making up for lost times.

Days after his profound apology, rumours revealed that he was reportedly expecting his 8th child. According to a popular blogger on IG, Tuface impregnated a banker.

The post reads, “2face recent apology turns out he got another lady pregnant… A banker. I’m tired”.

Days after the reports, the singer took to social media to address the rumours.

The singer debunked the rumours through his management and described them as false and malicious.

His management urged his fans and media platforms to disregard the news as it is fake news.

2face noted how the fictitious banker character had been repeatedly getting e-pregnant for him for two or three years since 2014.

The statement added that there was no truth in the allegation.

“It is understandable for fans, friends and concerned members to get curious and seek to know why @official2baba posted an apology to his wife @annieidibia1, family and management a few days ago. We would like to put it on record that the “why” is exactly what was explicitly spelt out in the same post – the pressure of almost a quarter of century of superstardom and a wish to focus on making music without the burden of high expectations of a role model. Reports of him getting anyone pregnant are totally false and malicious and we urge well-meaning media platforms and members of the public to completely disregard such. It is fake news. Many would recall that this fictitious banker character has been repeatedly getting e-pregnant for @official2baba every two or three years since 2014. There is no iota of truth in this allegation”. 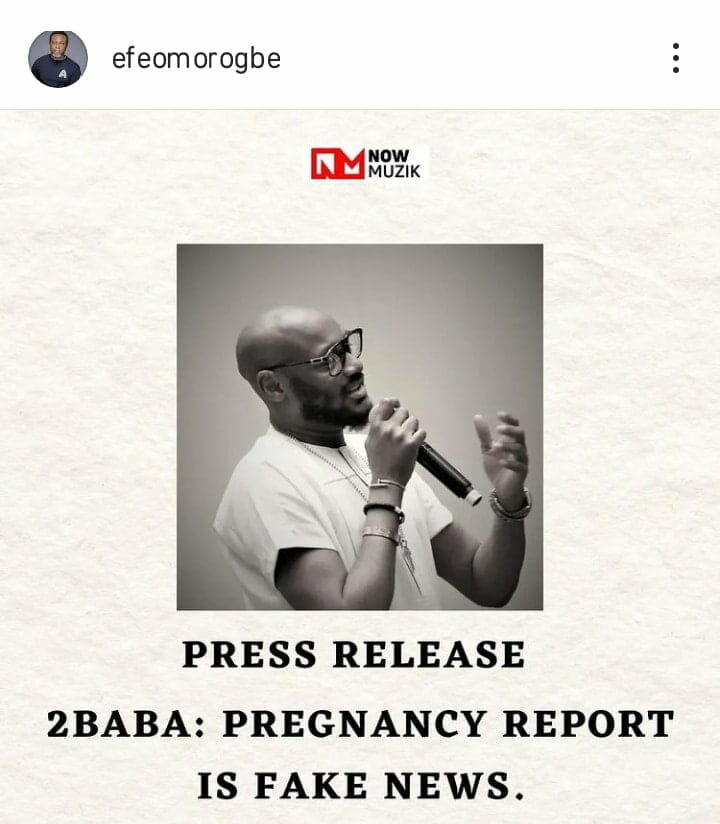 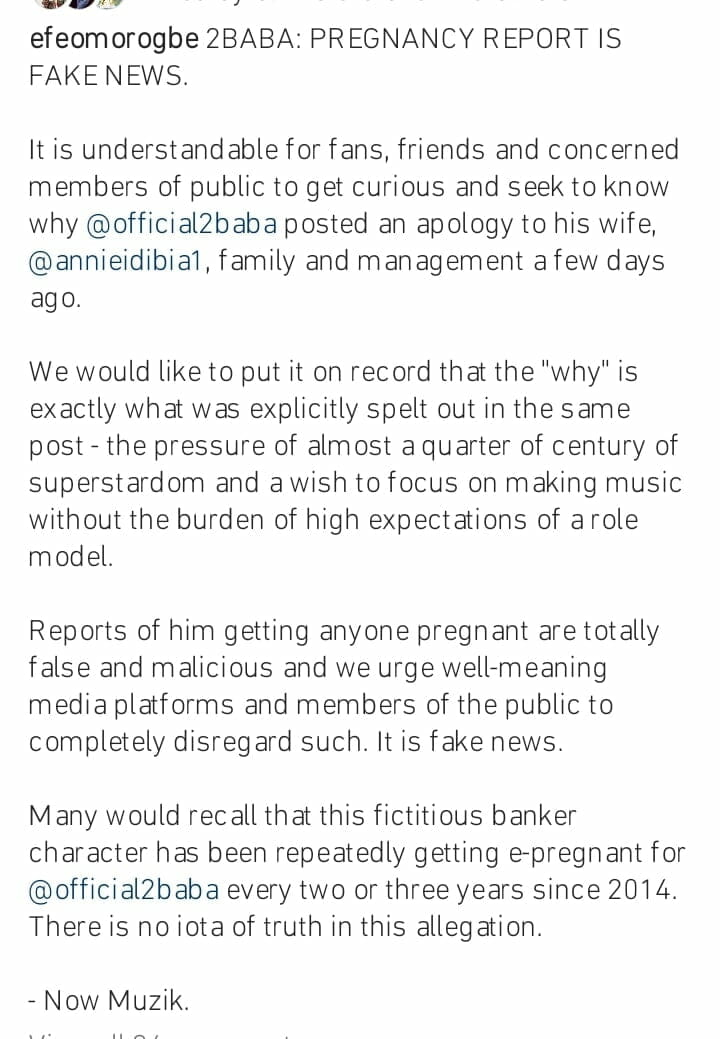