A lot of things had happened within me but God has chosen to keep me Actress Eniola Badmus says as she clocks ‘age 44’ » Naijabulletin
BREAKING
Published on: September 21, 2021

Nollywood actress Eniola Badmus has shared jaw-dropping photos of herself as she celebrates her 44th birthday today, 7th September 2021.

In the post shared on her Instagram page, the curvy actress said the last 365 days of her life had taught her the act of constant and conscious gratitude.

Eniola Badmus said many things have happened within and around her, but God chose to keep and her name high irrespective of all odds.

The chubby actress added she is super excited for the gift of life, good friendship and amazing fans whose prayers have kept her going.

READ ALSO:  Davido inks tattoo of his children faces on his body (Video)

She wrote: if there is anything that the last 365 days had taught me, is the act of CONSTANT AND CONSCIOUS GRATITUDE. A whole lot of things had happened within me and around me but God has chosen to keep us and keep our name high irrespective of all.

I am super excited for the gift of life, for good friendships, and amazing fans/followers whose prayers and supports have kept me going, always.

God, I can’t be grateful enough and I pray that you perfect all that concerns me and continue to let my light SHINE because you have just started. 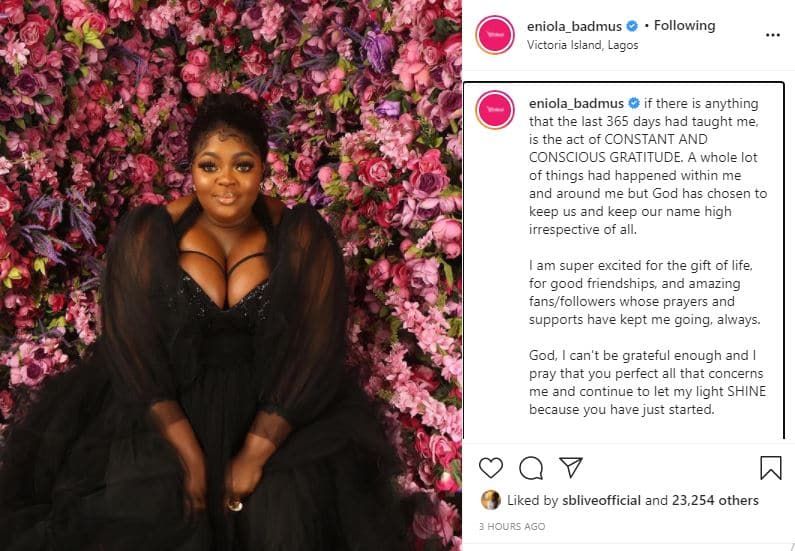 ‘I miss you mama’ Actress Eniola Badmus mourns her mother