Browny Igboegwu, a Nollywood actor has revealed why parents especially celebrities should stop trusting domestic staff as he reacts to the demise of singer Davido’s son. 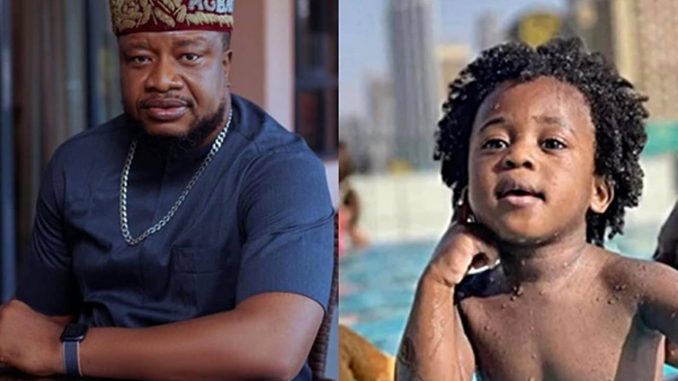 Mourning the shocking loss, Browny said he has been waiting to hear it’s fake news, but unfortunately it turned out to be real.

Consoling the singer and his family, Browny said his heart bleeds especially when he thinks of how painful the boy’s death would have happened after struggling in that pool before giving up the ghost.

The actor then took the opportunity to appeal to fellow parents especially celebrities and working class parents who are busy with work, to please learn a very big lesson from this and always look after their children and never trust in nanny or other domestic staff because the devil is tricky.

He wrote:
‘I have been waiting to hear it’s fake news, but unfortunately it’s a reality. My sympathy to your parents and everybody who love you. My heart bleeds especially when I think of how painful your death could be , I can imagine how you may have struggled in that pool before giving up the ghost and nobody could rescue you, my heart bleeds

Fellow parents especially celebrities and working class parents who are busy with work, pls let’s learn a very big lesson from this. Pls always look after your child and do not put so much trust in the nanny or other domestic staff the devil is tricky

Rest In Peace son you will be missed’

Wizkid reacts to the death of Davido’s son

Award-winning singer, Wizkid had showed his support for his colleague, Davido as he mourned the death of his first son.

It is no longer news that the first son of the singer, who he shares with his girlfriend, Chioma Rowland had passed on.

The sad news broke out on Monday night, October 31st.

As the world mourn the death of the singer’s beloved son, Wizkid had showed sign of concern.

The Grammy singer, who wasn’t aware of Ifeanyi’s death, took to Twitter to promote his album.

The singer announced that he would be releasing his album in November.

Wizkid, deleted the tweet, minutes after he posted it, to show solidarity with Davido.

The comic actor, who had been devastated over the painful news called for prayers on the singer and his girlfriend, Chioma.

Williams revealed how he said to himself, he wouldn’t believe anything on social media until he confirmed it.

Williams Uchemba, on confirming the news stated that he has been upset, pained and confused.

He pointed out how no one deserved to feel such pain.

“I said won’t believe anything on SM until I personally I prayed for it to be a lie. I am upset, pained and confused. Nobody deserves to feel this pain.

Please say a prayer for David, Chioma and the entire family. Nobody deserves this kind of pain. Rest up little one”.