Nollywood actor Funsho Adeolu has blasts veteran actor Jide Kosoko alongside other stakeholders of the Theater Arts and Motion Pictures Practitioners Association of Nigeria over threat to frustrate Iyabo Ojo and Nkechi Blessing in the Nollywood industry.

Naijabulletin News earlier reported that the decision follows the condemnation of their colleague, Baba Ijesha, alleged of defiling the foster daughter of Nigerian comedienne, Princess.

Nkechi Blessing and Iyabo Ojo also clashed with some TAMPAN members, such as Yomi Fabiyi, Lege Maimi, who kicked against them for openly condemning Baba Ijesha.

However, veteran actor Jide Kosoko during a press briefing over the weekend, said the association frowned at the derogatory statements made by Iyabo Ojo and Nkechi Blessing against the Association and the industry as a whole.

It also barred directors in the association from working with the two Nollywood stars.

READ ALSO:  My boyfriend ‘accidentally’ impregnated another woman after I paid 2 years house rent for him – Lady cries out

Reacting, Funsho Adeolu in a post shared on Instagram said he’s ashamed of the leadership of the association adding the do not have the interest of their members at heart.

He wrote: My face is covered, not because of covid but in shame on behalf of those who call themselves leaders of local association and do not have the interest of members at heart. God is watching o 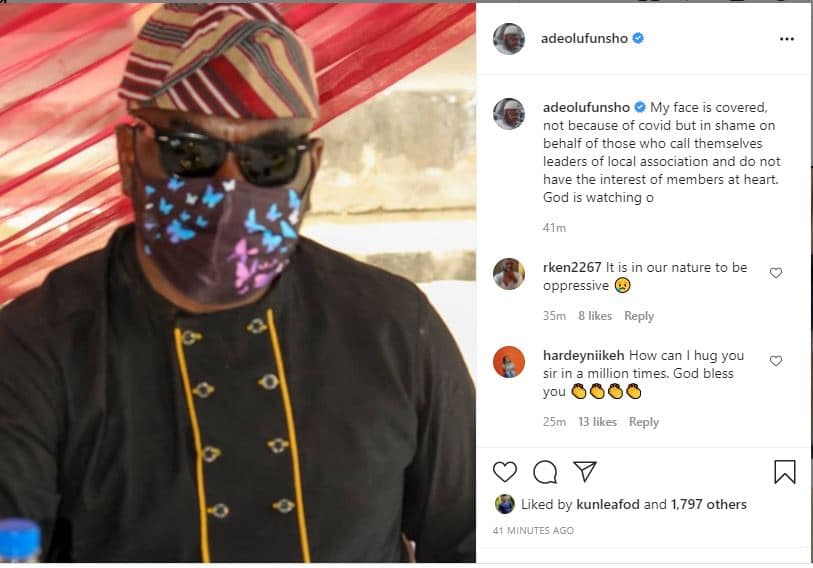