Reacting to this, Mo Abudu, in a post shared on Instagram, described Funke Akindele as an incredible creative genius and queen of comedy.

According to Mo Abudu, she feels honoured to have worked with Funke Akindele on the ‘Omo Ghetto’ Saga project, especially after breaking cinema box office records nationwide.

Mo Abudu wrote: Good evening beautiful people. I’m excited once again to share with you great news from another incredible creative genius, another AMAZON, The Queen of comedy herself.

I had the pleasure of working with @funkejenifaakindele as director and lead actor on our movie – “Your Excellency” and a year later she brought the world another blockbuster – Omo Ghetto.

Again, we were honoured at EbonyLife Place to have played host to the grand premiere of Omo Ghetto last year and we are super excited that Omo Ghetto will commence screening exclusively on Netflix from the 10th of September after breaking cinema box office records nationwide.

I thoroughly enjoyed the movie when I watched it at the premiere and every other time since then. And now I am going to cozy up again on the 10th of September to watch it all over again. Congratulations my darling @funkejenifaakindele @jjcskillz and to the entire team!!

Responding to the post, Funke Akindele appreciates Mo Abudu for her congratulatory messages adding that she always inspires her to work smarter.

funkejenifaakindele wrote: Thank you so much ma. I really appreciate ma. You always inspire me to work smarter. 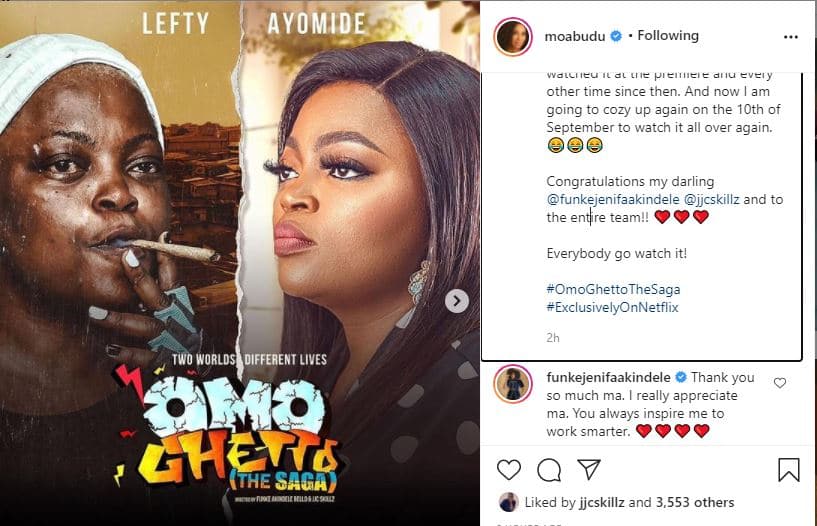 ‘Sometimes I even feel like giving up’ Actress Funke Akindele