Nollywood actress Iyabo Ojo has made a powerful declaration to her enemies, disguising themselves as friends in a new social media post.

Taking to her Instagram page, Iyabo Ojo prayed that those seeking her downfall and destruction are digging their pit, and all their lies and plot against her would consume them.

Iyabo Ojo said she would continue to rise and win, and her success will constantly be a headache to her frenemies because it gives her joy.

She wrote: To those who seek my downfall and destruction, you are only digging your own pit. All your lies and evil plot against me will definitely consume you because there is no peace for the wicked.

You will continue to fall and fail and I Iyabo Ojo omo Olubunmi Fetuga, Ologunfunfun1, Akanda Omoladukeade, Afunimaeobe will continue to rise and win. Oya continues, let my success constantly be your headache, it gives me joy. This is to all my frienemies make una collect. If you’re not my frenemies oya say amen….

News recalls Iyabo Ojo pleaded with her fans to monetize all gifts they wish to give her for her mother’s remembrance burial party.

Iyabo Ojo disclosed this after a friend offered to give her twenty-six cows for the party amidst the huge number of cows she received.

In the post on his Instagram page, Iyabo Ojo said she does not want cows again as she has no ranch to keep them; hence people should convert all cow gifts to money. 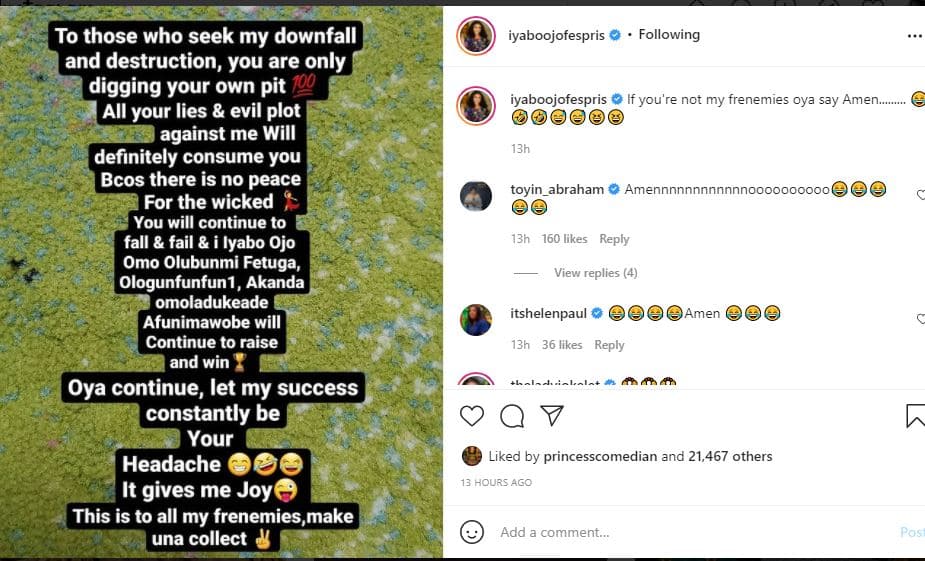 ‘Words alone can’t describe how much I miss you’ Actress Iyabo Iyabo Ojo mourns, pens down touching tribute for her mother