‘I came into this world already a queen’ Actress Jaiye Kuti celebrates her birthday with adorable photos » Naijabulletin
BREAKING
Published on: September 21, 2021

In the post shared on her Instagram page, the actress bragged about being born a queen but did not start life as a queen.

Amidst life challenges and all she has been through in life, God still made her a queen to many people, and she has the heart of love.

She wrote: Hello July Queen.,,. On this day I was born, I came into this world already a Queen. But I started life, not as a queen, I started life just like you, you and you. But God Almighty made me the Queen I am now. On this day a Queen was born. I’m the Queen of hearts. I have the heart of love.

News recalls that Jaiye Kuti a few months ago revealed that she is an Abiku (Ogbanje).

For clarity, Ogbanje/abiku refer to people who are believed to cycle rapidly and repeatedly through birth and death. A consecutive familial sequence of births and deaths of infants is construed as the same child dying and being born over and over again.

Jaiye Kuti made this shocking revelation in a birthday message she wrote for her mother on Instagram.

READ ALSO:  ‘My life’s greatest treasure’ – Bimbo Oshin pens down tribute to her bestie, Jaiye Kuti as she clocks 50

“She gave birth to 11 children and because of me (Abiku) we are now seven. She said she wanted to have many children as She’s not sure which one will be Abiku again. Then she met Christ Jesus and gave all her life. And from there and then, here we are not only that she has children.” 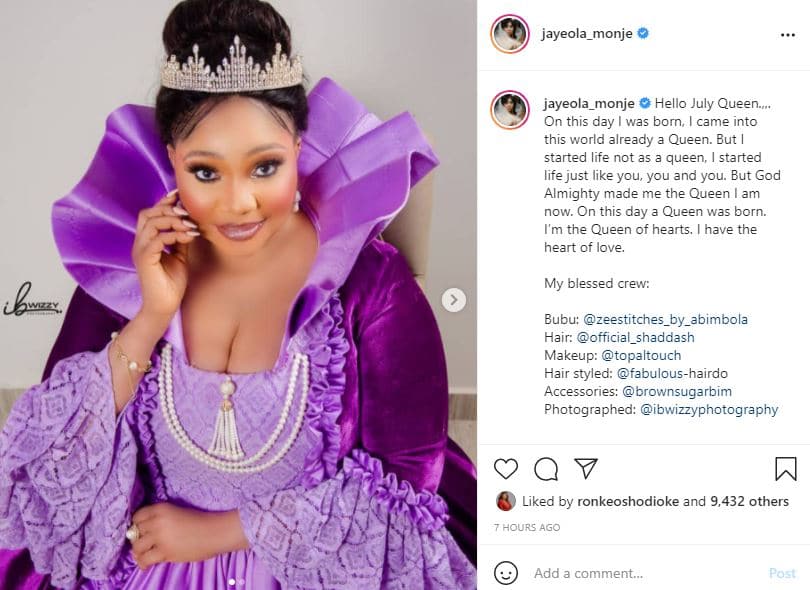 Trouble looms as Jaiye Kuti shades Iyabo Ojo and Omo Brish in her birthday message to her bestie, Bimbo Oshin