Nollywood actress Kemi Korede is still basking in the euphoria of her birthday as she has taken to her Instagram page to share a huge money cake she received as a gift.

Kemi Korede had received several birthday gifts on her big day, but the biggest of them all was the massive money cake.

The money cake of the Nollywood actress was made up of N1,000 and N500 notes, but the higher denomination was more than, the lower one. It was a seven-tier money cake.

READ ALSO:  “Fake it till you make it,” – Actress Ese Eriata advises Nigerians after her friend’s experience

Kemi Korede, who seemed very excited about the gift, said it’s not a show-off, but she’s grateful and feels honoured for the tremendous gift since her birthday.

She also took out time to pray and appreciate everyone who had showered her love on her birthday.

She wrote: This isn’t a show off o Eyin eyan mi. I am just so grateful & feel honored for the massive show of love since my birthday July 15th.It feels like it’s still my birthday. How did I get so lucky?Its been raining gifts everyday.

READ ALSO:  Singer, Faze Alone in sorrow as he loses his twin sister

May Allah continue to bless you all & shower you with his mercy. Yes you!You & You.Thank you all so much.Ire akari Insha Allah Tons of love. 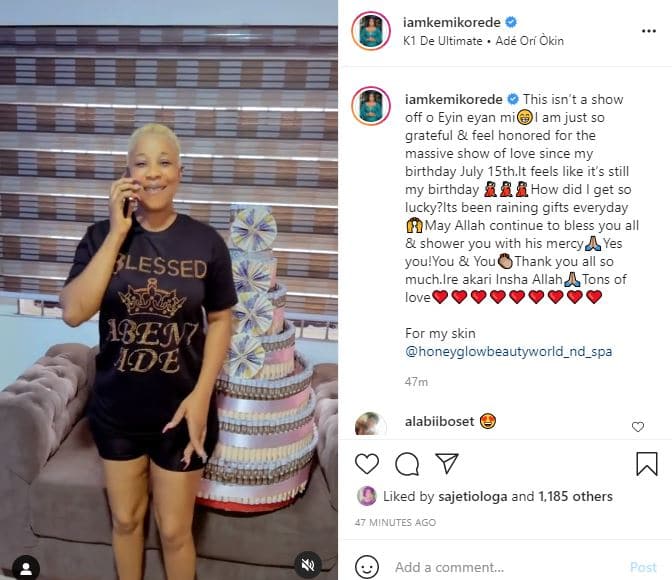 Actress Kemi Korede shows off massive money cake she received on her birthday..