Actress Nkechi Blessing reveals what she did to a man late for an appointment » Naijabulletin
BREAKING
Published on: September 17, 2021

Nollywood actress Nkechi Blessing has advised her fans and followers to learn to stand in the gap for men because they sometimes need it.

In a post shared on her Instagram story, the actress said she stooped up for a man almost stranded because he was late for a 10 am appointment.

According to Nkechi Blessing, women may not always stand up for women, but men sometimes need a guarantor.

I stood up for a man today that was almost stranded cus he came late to a 10am appointment……We can’t always stand up for women, men too need Oniduro once in a while.

News recalls fans of Nkechi Blessing recently reacted to a photo of her mother and actor Osita Iheme.

Nkechi Blessing took to her Instagram page to share a photo of her mother and Osita Iheme, stating he is her mother’s favourite actor.

Nkechi said when her mother sent her the picture, and she questioned why the duo has some resemblance.

She captioned the post: The oda day my mum met her Fav actor She took this picture and sent to me.. And I was like ahn ahn why una come Resemble like this. Tag the actor…He happens to be my neighbor tho.

READ ALSO:  Actress Nkechi Blessing sends messages to people who are waiting for her bad news

According to some fans, if not for Nkechi Blessings caption, they would have doubted that the woman is not Osita’s mother. 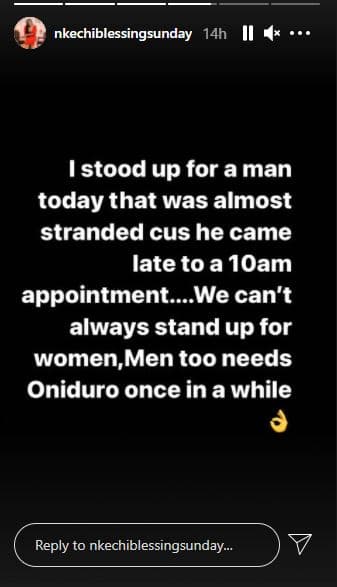 Sound Sultan: Actress Nkechi Blessing tenders apology to everyone she has offended