Actress Tonto Dikeh reacts after a video of her ‘arrest in Dubia’ resurface online
BREAKING
Published on: December 2, 2021

Actress Tonto Dikeh reacts after a video of her ‘arrest in Dubia’ resurface online….

Nollywood actress Tonto has reacted after a throwback video of her arrest in Dubia and deported after drugs were found on her surfaced online.

News recalls Tonto Dikeh and former bestie, Bobrisky, on November 25th 2019 battled with blogger SDK, for breaking the news of her ordeals in Dubai.

It all started when SDK broke the News of Tonto Dikeh’s arrest in Dubai and in anger, Tonto and her bestie, Bobrisky, began mocking her and comparing her to blogger Linda Ikeji.

However, the mother of one stated that such never happened because she was only involved in a scuffle with security authorities.

Tonto Dikeh in an interview revealed that the scuffle occurred after one of the guards called her a prostitute in Arabic.

In her words: ”That incident in Dubai was not drugs because if it was I would be in jail. It had nothing to do with drugs or alcohol even.

“On that day, I was insulted by one of the guards. He said something very derogatory to me in Arabic, I think Lebanon. It’s called Sharamuta which means prostitute, it means a call girl and I was not so dressed.

“But it was a show, so I had like a very amazing bra inside and this blazer on top. To them, it is Haram when you are not dressed properly. So that is where all of the altercations started. That was the only problem, any other information is just false,” Tonto said.

According to her, she did not give details about the incident earlier because she has a home in the country and would not want to jeopardise her stay there.

“I really don’t want to go into so much detail about Dubai because I have a home there now and I want to be able to enter freely after all of this and that is why I never really talked about it,” the actress added.

Two years after the incident, Tonto Dikeh still reiterates that she was never arrested for Drugs in Dubia after an Instagram blogger, Gistlovers, shared the throwback video of the arrest.

Reacting to the video, Tonto Dikeh shared the lyrics of a Jamaican-American musician’s song titled ‘ It wasn’t me’.

She wrote: VAWULENCE. It wasn’t me #Shaggy 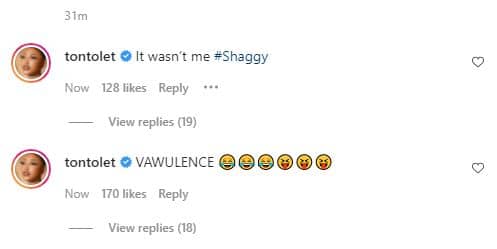 ‘I’ll never regret the love I gave anyone, even if it wasn’t reciprocated’ Actress Tonto Dikeh