Fans and colleagues of Nollywood actress Toyin Abraham have reacted to her directorial debut in the movie titled ‘ Listening Ears’, which premiered a few days ago on YouTube.

A few hours after the movie premiered, it generated over a hundred thousand views, and the actress has continued to receive accolades from fans and colleagues over the project.

According to some reviews on her comment section, the movie storyline centred around a female lead in a romantic relationship with a younger man starring Kehinde Bankole, Deyemi Okanlawon, Kunle Remi, Chimezie Imo, Tomiwa Tegbe, including Instagram skit makers Adeherself, IsBae U and newbie actors Seyi Kayode and Okusanya Ololade.

Toyin Abraham appreciated and shared her godmother’s review of the movie stating she’s is proud of her.

She wrote: Got this from my godmum @tayofak this morning after she saw Listening ears my directorial debut. Thanks mummy @tayofak Love u so much.

mo_bimpe wrote: We are all proud of you director extraordinaire

READ ALSO:  Amidst criticisms, Toyin Abraham shares video of a pastor praying for her at premiere of ‘Ghost and the Tout too’

debbie_shokoya wrote: I Am Proud Of You Mother

ucheogbodo wrote: You are too much

originaldemmy wrote: I’ve never watched a Nollywood on YouTube…..After seeing the hype I decided to watch. Believe me when I say that movie exceeded my expectation. Good job Mrs toyin 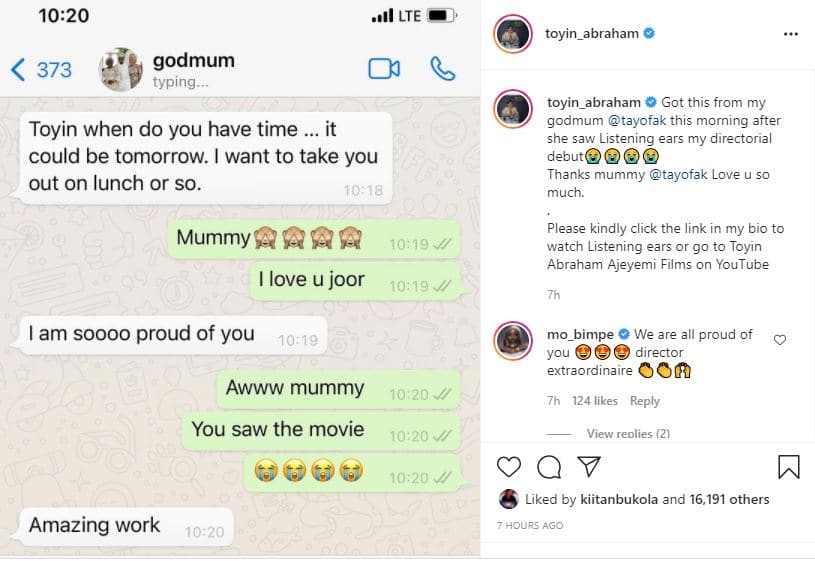 Actress Toyin Abraham leaves fans in suspense as she set to make a big announcement about her son, IreOluwa

‘No jokes, I am too fine’ – Actress, Toyin Abraham brags