Adeniyi Johnson and his wife, Seyi Edun, pepper haters as they hookup after her return to Nigeria » Naijabulletin
News

Adeniyi Johnson and his wife, Seyi Edun, pepper haters as they hookup after her return to Nigeria

Nollywood couple Adeniyi Johnson and his wife, Seyi Edun, have sent a strong message to their haters as they hook up on his wife’s return to the country.

Naijabulletin News reported that Seyi Edun was excited about her successful landing in the United Kingdom after so many years of being at it.

The actress, who travelled to the UK for vacation and shopping for her fashion business, shared photos of herself on arrival at the airport with an appreciation and cheering caption.

“God is never too late … after many years I’m back in the UK…….London! Be nice”

On return to Nigeria, Seyi Edun and her husband peppered their haters with beautiful photos of themselves while goofing around.

Seyi Edun claimed her husband, who did not miss her as he had claimed in several posts, was ecstatic on her arrival. 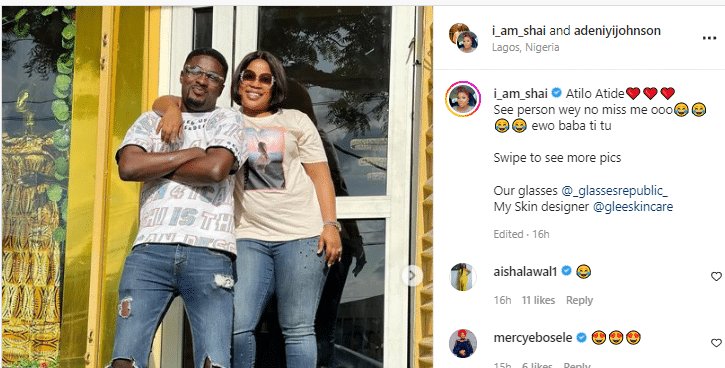 News recalls that Adeniyi Johnson broke the silence after a controversial blogger threatened to reveal secrets about his wife, who was out of the country.

Adeniyi Johnson took to his Instagram page to share a video of himself addressing the photo of his wife that has gone viral on the internet.

The actor condemned those who tagged and messaged him about the post, stating they are all looking for his marital downfall, which will never happen.

Adeniyi Johnson urged his haters to concentrate on their life rather than trying to interfere in other people’s affairs.

Adeniyi Johnson and his wife, Seyi Edun, pepper haters as they hookup after her return to Nigeria