Adeniyi Johnson calls out wife, Seyi Edun for infecting him with virus days after returning from UK » Naijabulletin
News

Adeniyi Johnson calls out wife, Seyi Edun for infecting him with virus days after returning from UK

Nollywood actor, Adeniyi Johnson has lamented over how his wife, Seyi Edun had infected him with virus days after returning from the UK.

News reported in May that Seyi Edun had returned to the United Kingdom after many years.

The actress was quite overjoyed about visiting the beautiful country as she couldn’t hold her excitement.

Taking to her Instagram page, Seyi Edun expressed joy for been able to visit London after several years.

She wrote, “God is never too late…after many years I’m back in UK.. London! Be nice”.

The actress who has returned to Nigeria seems to have brought back a virus with her.

Taking to Instagram, Niyi revealed that his wife had infected him with the TikTok virus.

Niyi stated that he has become addicted to the social media app.

News recalls Adeniyi Johnson had dropped his ego and had admitted how much he missed his wife, Seyi Edun, who was on vacation in the UK.

He however asked his fans not to tag her to avoid her feeling too important.

“Tired of forming big boy jare…Madam I miss you. Note please do not tag her her shakara go double” Adeniyi Johnson wrote on Instagram. 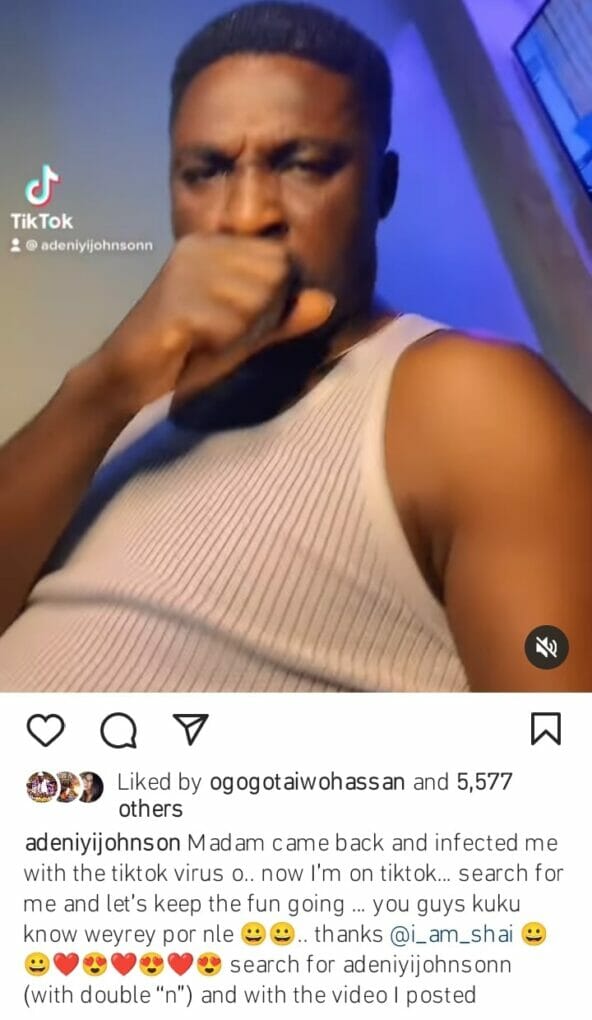 Adeniyi Johnson calls out wife, Seyi Edun for infecting him with virus days after returning from UK