Actress Adesua Etomi blasts lady who scolded her for being angry that her driver wrecked her car | Naijabulletin
BREAKING
Published on: October 20, 2021

Nollywood actress Adesua Etomi has blasted a lady who criticized her for being angry at her driver for wrecking her car a few years ago.

In a post shared on the microblogging platform Twitter, the actress said she’s constantly upset anytime she remembers that the driver wrecked her car, which never happened even after three years of buying the vehicle.

Reacting to the post, a Twitter user identified as Shawama berated Adesua Etomi for being angry at her driver and still unable to get over the incident stating such an incident can happen to anyone no matter how one tries to be careful.

READ ALSO:  If I Don’t Look This Good At 50, I Will Tear My Shirt – Adesua Etomi Tells Kate Henshaw

Responding, Adesuwa blasted the lady stating she does not have a right to send such a reply, especially when she does not know the circumstance of the accident.

Adesua Etomi wrote: Everytime I remember that the driver wrecked my car, I’m upset all over again. Not even 3yrs since I bought it.

Shawama replied: What if you did that yourself will you be angry with yourself, it can happen to anybody know matter how careful you are, put yourself in that same show, money come and go we all know that, I don’t pray for your downfall, more blessing come you way Ade.

READ ALSO:  Davido reacts as robber confesses – "I stole to raise money to feature O.B.O on my album”

Adesua Etomi wrote: You don’t have a right to send me this kind of reply especially because you don’t know the circumstances of the accident. 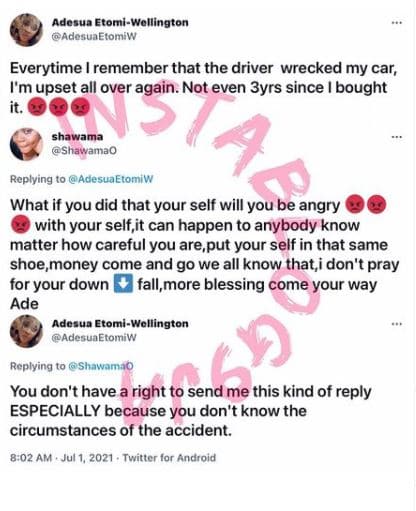 Adesua Etomi blasts lady who scolded her for being angry that her driver wrecked her car.

If I Don’t Look This Good At 50, I Will Tear My Shirt – Adesua Etomi Tells Kate Henshaw