It appears all is presently not well with Super star 2face Idibia and his wife, Annie Idibia following an outburst from the latter on her Instagram story, moments ago.

In the outburst on her Instagram page on September 2, 2021, Annie Idibia called out 2face Idibia for still spending nights with his babymamas especially Pero Adeniyi, despite being legally married to her.

Although Annie Idibia has deleted the outburst, here are some screenshots of them courtesy of GistLover blog.

“What kind of Man takes his kids to Disney and spend nights in the same with his kids and their mother? How many times have you gone to see your kids with Pero and she stay with you and the kids under the same roof for nights! Your babymamas constantly use your children as an excuse for all sort of rubbish! I try to stay gracious!!

You are not the first man on the planet to have kids by different women, you can do better. Everything I do is to show the good human that you are…but today, this move done by you Efe, Frankie and your family is unacceptable.

I am a patient woman, I am not fool Innocent, Your Family never loved me from the beginning, no matter how hard I tried….I was never worthy to them!!! I have made so many sacrifices for you and all your children, God knows I have tried.” 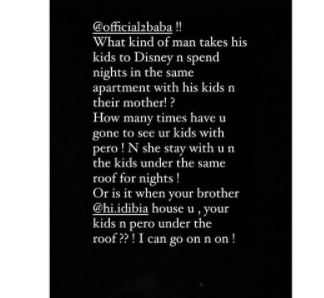 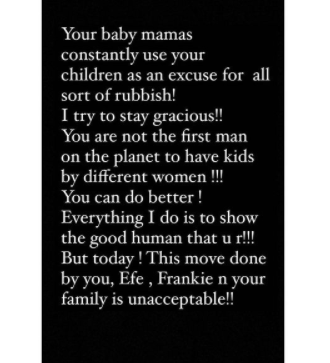 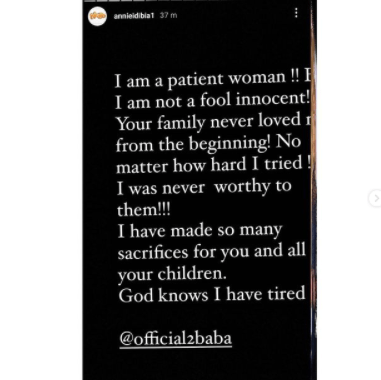 Pero and Annie who used to be best of friends, had not been in talking terms for years after the former snitched on the latter by getting pregnant thrice for the former’s man, 2face.

The last time Annie Idibia reacted to anything concerning Pero Adeniyi was when a picture surfaced showing her husband 2face kissing her. Reacting to the photo, she said,

“I am aware of the photo’s circulating the Internet with my husband and Pero Adeniyi. I want to state officially that I was not in that space at that time and therefore there was no confrontation between myself and Pero Adeniyi.”

“Pero Adeniyi and this momentary indiscretion poses no threat whatsoever to my relationship with my husband. As a matter of fact for all of our children’s’ sake, I do encourage cordial relationships with parties involved.”

“This year, my focus is solely on God, Family and my Career which doesn’t give me the luxury of paying attention to any distractions.”

Although they publicly settled their fight in 2018, it now appears that they are still at war.

In an interview with Hypertek’s Digital boss, he disclosed why he opted for Annie above others.

He explained all his baby mamas are well-to-do and very much learned but Annie possessed the latter and not the former.

2Baba said: “You see Annie is from an average background like myself. We both started from nothing. She stuck by me through it all. When there was no car she hopped on bikes, took the bus, and trekked with me. When there was no money or house or hit song or millions of albums sold or big awards and accolades.”

“When I used to repeat just 3 sets of clothes, she would always hold my head, look me in the eyes and tell me things will be fine one day. When I wasn’t handsome, she would call me her prince charming. When I wasn’t celebrated, she called me her king and said she is my number one fan and to this day, she still is.”

“Even when I made it big as a musician and started misbehaving and controversies almost destroyed my career, she would go down on her knees and pray to God to show me the way and give me victory over my enemies.”

“Now if am still that small boy struggling to make it like every other young chap on the streets of Lagos, do you think a doctor, a lawyer, and a multi-millionaire businesswoman would want to look at me or even have my kids? No, so to answer your question, I did not choose who had more to offer me, I chose Annie because she offered me her all when we had very little”.

“I disown that entity as my sister, nothing connects me with her anymore” – Annie Idibia’s brother announces (VIDEO)