BBNaija 2021: ‘Cross snatched my girlfriend’ – Nigerian man cries out, vows to vote him out › Naijabulletin
BREAKING
Published on: September 29, 2021

BBNaija 2021: ‘Cross snatched my girlfriend’ – Nigerian man cries out, vows to vote him out

A Nigerian man identified as @GunnsandRises on Twitter has vowed to vote out BBNaija ‘Shine ya eyes’ housemate, Cross.

According to @GunnsandRises, the 31-year-old snatched his girlfriend of 5years and he feels hurt anytime he sees him on the reality show.

Speaking further, @GunnsandRises said he caught his girlfriend and Cross in an intimate position when he travelled to go and join his lover.

This he said hurts him so much and he would spend any amount to get Cross out to the show.

READ ALSO:  BBNaija: My mum once beat up her suitor after he paid her bride price – Cross reveals

“Cross stole my girlfriend of five years. She finished uni before me so was first to travel out and we agreed, I will meet her in a year. I got there and caught her and cross. That’s why I will vote cross out. seeing him hurts me so bad. I will spend any amount to get him out.”

@jajaprisca wrote “Blame ur girlfriend and not cross”

READ ALSO:  VIDEO: Tega finally reunite with her husband as they share a passionate kiss

@asalewa wrote “Cross didn’t steal her. She met cross and left your ass!! So shut up” 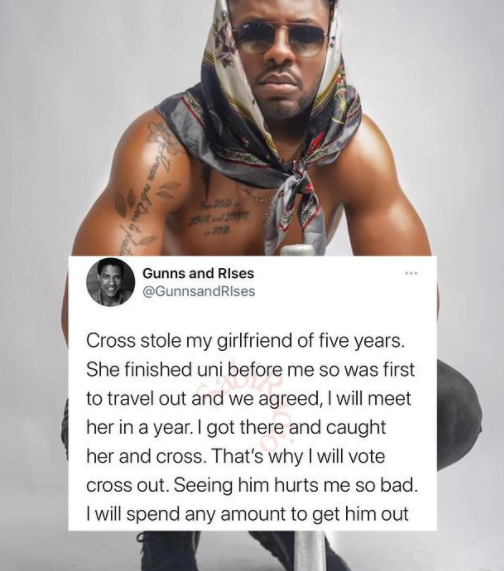 BBNaija 2021: ‘Cross snatched my girlfriend’ – Nigerian man cries out, vows to vote him out.

BBNaija 2021: “I don’t want to be in same team with Maria again” Whitemoney cries out