Evicted BBNaija housemate, Boma Akpore has tendered an apology to Nigerians who are raving mad about his abominable dealings with a married housemate, Tega.

News recalls that Boma’s eviction was much anticipated than that of other housemates who were also evicted yesterday. He was declared the most wanted since his illicit affair with Tega and his ‘Okro’ strategy of getting highlights from lovers of the show.

Taking to his Instagram page, Boma, who had most likely seen the disgusting comments about him has apologised for his wrongdoings and hope for a better relationship with his fans.

Speaking further, he said you have to make mistakes for you to learn from your mistakes.

“You have to make mistakes to find out who you aren’t. You take the action, and the insight follows: You don’t think your way into becoming yourself”. I take full responsibilities for my actions and I am sorry it only get better from here #BBNaija

READ ALSO:  #BBNaija: “Angel will be a strong voice to mental health” – Blessing Okoro says as she pledges to root for her for humanity sake 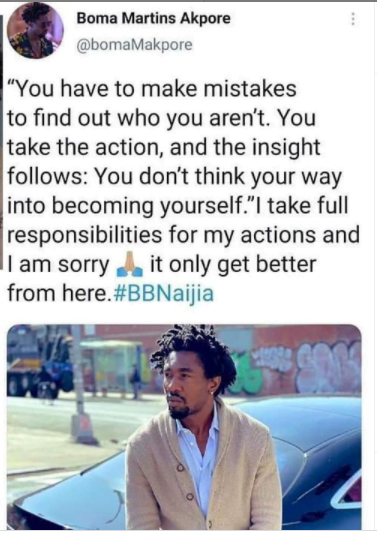 BBNaija: Tega’s Husband Reacts To Video Of Boma In Bed With His Wife

BBNaija 2021: “Boma And I Never Got Intimate Under The Sheets” – Tega Refutes Trending Stories

I felt really sad and broken over my wife’s affair with fellow housemate, Tega’s husband says