Big Brother Naija ‘Shine Ya Eye’ housemate Yousef has sparked outrage on social after he emerged as the wealthiest housemate from the game played so far in the season.

Yousef has got 1.82 million from games they played in the house, which beat the expectations of many Nigerians who thought he would not go far in the game.

A few hours after the male housemates of this season were unveiled, netizens made a mockery of Yousef by calling him ‘Aboki’, using him for different memes and styling him as a cast in Bollywood.

READ ALSO:  BBNaija 2021: Whitemoney and other housemates break down in tears as they advocate for mental health awareness

However, Yousef surprised many after he escaped the first eviction and many people wondered who had voted for him.

Again Yousef has topped his fellow housemate, Liquorose, Micheal, JMK, Whitemoney, Pere, Maria and other to become the richest in the house.

Reacting social media users likened Yousef to a typical example of grace and recalled how they had thought he would have left the show before now.

olar_gold wrote: That Yousef is low-key bagging it

theellabaddie wrote: This yousef is a typical example of “grace found me”

pretty.juddy wrote: Kudos to this yousef.. While I was thinking he would be among the first two to leave the house

emmyyice_aralomo wrote: Yousuf might reach the finals just like Neo….people don’t really notice the guy but he is going far 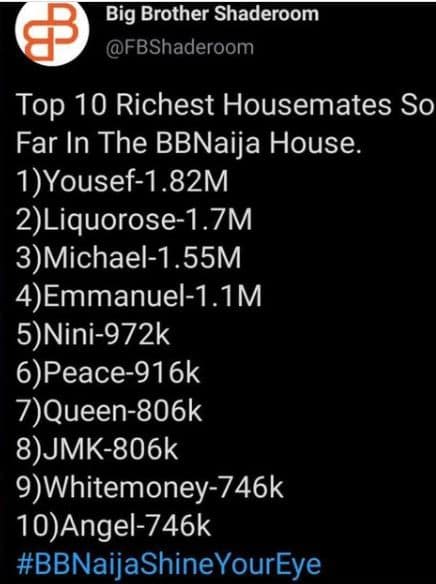 #BBNaija 2021: Yousef sparks reactions as he emerges the richest housemate.

Big Brother bans Maria, others from the Head of House room for 2 weeks