‘Broke b*tches’ – BBNaija Mercy blasts all the females in Nigeria over failure to get someone to take her N5M bet › Naijabulletin
BREAKING
Published on: September 29, 2021

Big Brother Naija Mercy Eke has taken to Twitter to blast all the females in Nigeria over failure to get someone to take her N5M bet.

This comes after the reality star announced her decision to place a N5M bet for the UEFA championship’s league final.

According to Mercy, she was in support of Mancity and she need to bet with someone a Chelsea fan.

READ ALSO:  “When A Man Is Useless, Drop Him Like A Used Sanitary Pad” – Mercy Eke shades Ike

Unfortunately, no one agreed to do this with Mercy and after the game ended and Man city lost, the brand-influencer reacted by blasting everyone for not taking her bet.

“Someone could have been N5M richer but bitches be broke Asf” 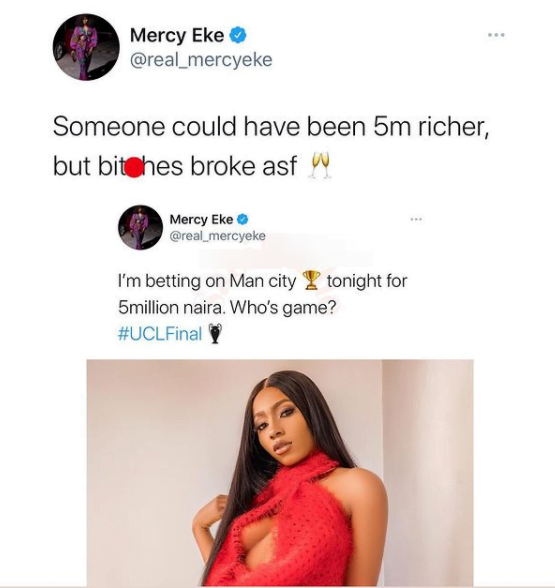 This Tweet did not go down well with many people on social media and it has generated different reactions.

@odachiagnes wrote “Before bbn, were you not broke?”

BBNaija Mercy blasts all the females in Nigeria over failure to get someone to take her N5M bet.

I hated God for abandoning me – BBNaija Diane Russet