Former Big Brother Naija ‘Shine Ya Eye’ Housemate Maria Chike Benjamin has been alleged to have rejected the gifts and money some of her fans offered her.

For the past few weeks, since the reality show ended, former housemates have received numerous gifts from their fans, from money cakes to Mac Book, pieces of jewellery, clothing items, and many more.

However, the claims of Maria allegedly rejecting money from her fans comes after the reality TV star took to her Instagram story to show off her Range Rover, wristwatch and wads of dollars.

This got many tongues wagging as some alleged that the gift might be from her sugar daddies in Dubia or could be audio money.

With several reactions trolling the video, which has become a growing sensation online, a fan of the reality star, while reacting, said Maria’s show of hard currency reveals why she rejected her fans money.

Another Instagram user who seemed to be a fan of Maria confirmed the reality star told them to keep their money when they sent her a gift.

maria_heartbeattt wrote: @sidney_sweety yes oo. She told us to keep our money and gifts. Stubborn girl. Na she Sabi…we go still give am something

News recalls Maria Benjamin was called out for allegedly dating a married man and compelling him to divorce his wife.

An Instagram blogger, Gistlovers, in a post shared on his page, warned Maria to stay away from the married man, and if the man eventually serves his wife a divorce letter, it would be messy for the reality star.

The post reads: Dear Maria,Kindly Stay away from somebody’s husband ,Atutu poyoyo,if that Man give him wife that divorce letter,e go red for you,I just said I should warn you in advance.I come in peace.

Reacting to the post, some social media users recalled how Maria once bragged about not dating a married man, and others expressed displeasure stating it is too early to be linked to such bad news.

Meanwhile, some netizens claim they are not surprised at the call out, especially as Maria decided to pitch her tent with former housemate Mercy Eke who has been repeatedly called out for dating married men. 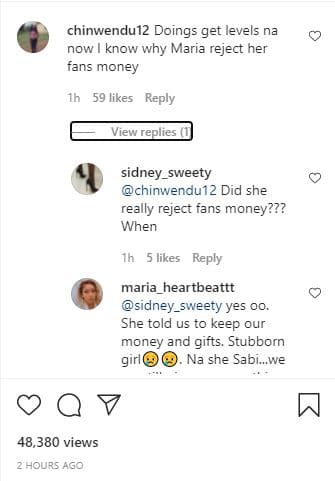 BBNaija: “If I Sleep With Boma And He Tells Pere, He’s Stupid” — Tega (VIDEO)

#BBNaija: Nini And Saga Narrate How Queen Touched Herself Till She Came (VIDEO)