Believe whatever you heard about me’ Actress Nkechi Blessing rants amidst reports that she snatched her colleague’s boyfriend » Naijabulletin
BREAKING
Published on: September 22, 2021

Believe whatever you heard about me’ Actress Nkechi Blessing rants amidst reports that she snatched her colleague’s boyfriend..

Controversial Nollywood actress Nkechi Blessing has continued to rant over the report alleging she snatched her colleague’s boyfriend, Kiitan Bukola.

News earlier reported that an Instagram blogger, Gistlovers, alleged that Nkechi Blessing crashed the relationship of Kiitan Bukola and her lover Olu Micheal.

According to the blogger, Kiitan Bukola had gone to a movie location. Upon her return, she met Nkechi Blessing in her boyfriend’s house, which led to the crash of their relationship.

In a new post on her Instagram page, Nkechi Blessing, who seemed unbothered about the news, said people should believe whatever they hear about her.

She said people could also add their side of the story because she is currently focused, and nothing can distract her.

She wrote: Believe what ever you heard about me,Kindly Add your own if possible. over here we stay FOCUSED.

News recalls that Nkechi Blessing in a post shared on her Instagram story, denied romantically being linked to the Kiitan’s boyfriend.

Nkechi Blessing said whatever a grown-up woman decides to do with her life should not be anybody’s problem describing the blogger as jobless.

She said people should believe the report to their detriment, describing it as an uninformed piece of garbage.

She wrote: Olofo is bored again no news to keep his jobless followers active. What grown-up woman choose to do with their own life is your own problem.

Your witchcraft or wizardry no dey hide again…Na people wey dey believe your rubbish I pity…uninformed piece of garbage…Arindin. 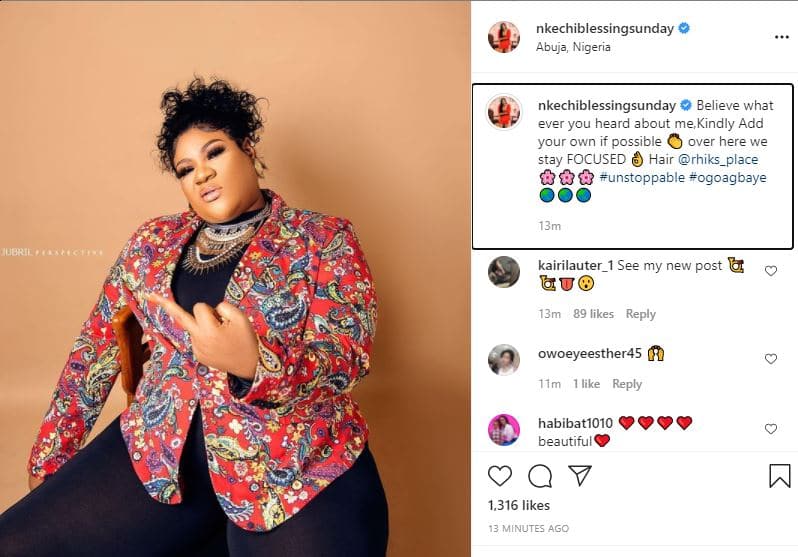 Believe whatever you heard about me’ Actress Nkechi Blessing rants amidst reports that she snatched her colleague’s boyfriend..