Nollywood actress Biodun Okeowo popularly called Omoborty has questioned if her colleague Baba Ijesha can be castrated after details on his rape case involving a 14-year-old girl emerged online.

In a new development, an Instagram blogger, Gistlovers, shared some facts on how the Nollywood actor was framed up, and he fell for it.

According to the blogger, Baba Ijesha had molested one of the adopted daughters of popular comedienne Princess at age 7 and 8 years, respectively.

At age 14, Baba Ijesha made advances at the young girl, and she opened up to an adult. Thereafter Baba Ijesha was set up with a CCTV camera, and he was exposed.

The blogger wrote: So been investigating this whole rape issue and this is what GLB came up with,This baba ijesha raped one of princess comedian adopted daughter, according to the girl who we will like to keep anonymous,Baba Ijesha molested her while she was 7years old and when she was 8,when she was 14 baba ijesha made an advance at her again and then she knows left from right,she confided in an adult and they set baba ijesha up with a CCTV Camera this time,that was how he was exposed.the matter is still at panti as Ali Baba’s side chic(Auntlanda)won’t let the matter go,she is following the case up with anger in her,at least she do this one well,she no snatch person husband this time around.We are also following the case up and will feed back our readers as the matter unfolds.I come in peace.

Reacting to this Biodun Okewo who had earlier demanded CCTV footage blasted Baba Ijesha as she expressed her disappointment at the whole situation.

officialomoborty wrote: Damn!!! Can he be castrated 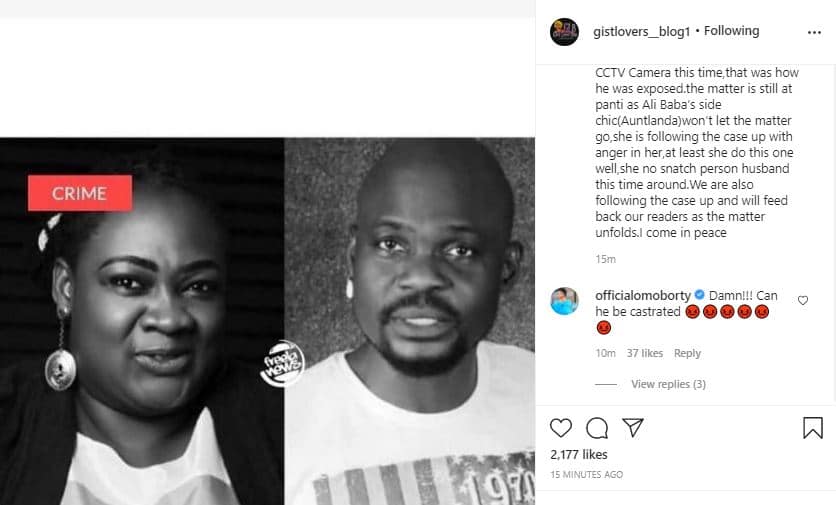 ‘Everybody is using you until they don’t need you again’ – Actress, Sikiratu Sindodo blows hot