As Nollywood actress Funke Akindele and her husband, JJC Skillz, have remained silent over the alleged crisis in their marriage, Cutie Julls has revealed some issues surrounding their marital situation.

According to the Instagram blogger, JJC Skillz, before joining Funke Akindele in Nigeria had an initial understanding that the SceneOne production would be a family business having the duo as certified owners.

However, Funke Akindele has never stopped acting and making it clear that she’s the owner of SceneOne production and only allowed JJC Skillz to have a decent amount of money.

The source also revealed that aside from the SceneOne company, the couple also agreed to take up private jobs, but Funke Akindele always came up with excuses why JJC Skillz should not take private jobs.

The blogger alleged that Funke Akindele rudely scolds JJC Skillz even when third parties are in their home.

The post reads: More on the Bello’s tiny issues:

From reliable sources in London, JJSkillz has said before joining Funke in Nigeria, the couple had an initial understanding that the Scene One Production will be family business with Funke and Abdul as certified owners and will be run by both parties. Also aside their production company both Abdul and Funke would be allowed to work on private jobs as well.

But after joining his better half, Funke never stopped behaving and making it clear that SceneOne Production is her own and will only let JJCskillz have a decent amount of money without having to explain himself and even that, Funke will have to see it as a reasonable excuse. Funke at least provocation will scream in a rudely manner even when third parties are around. Funke will freely take on private jobs but when it comes to Skillz being approached for other jobs with has no affiliations with their company, Funke will mostly come up with an excuse why Skillz can’t and shouldn’t take on the jobs etc

Skillz undoubtedly love his wife but the conditions were most times not comforting considering the fact that he has other kids who also sometimes depend on him for financial support as a father.

Our sources in Lagos revealed that the property that Abdul rented was probably for his older kids to live comfortably when they come visiting Popsy in Nigeria anytime.

Abdul only get to spend when Funke says so. So as small chance avail itself, Abdul made some expenditures without a mutual authorization from Funke. Hence when Funke found out about the unaccounted millions of Naira [not too extreme as per what they have made together], she got upset and the whole brouhaha started. 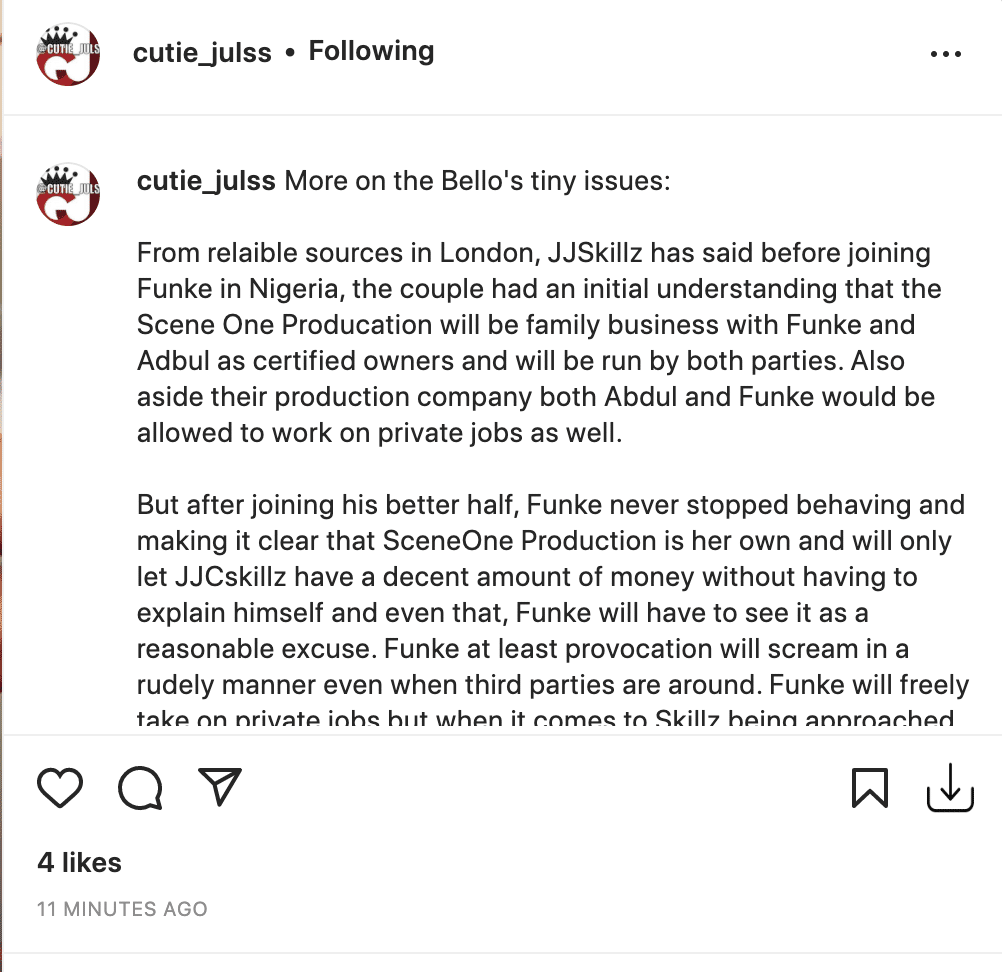