Actress Bukunmi Oluwasina has taken to social media to pray for the Yoruba movie industry who are supposed to lead by example but end up causing confusion.

This came after Yomi Fabiyi released the controversial movie ‘Oko Iyabo’ that threw people off balance.

Many celebrities like Bolanle Ninalowo and Mercy Aigbe had challenged his audacity to have enacted the rape scandal surrounding Baba Ijesha and using the actual names of the people involved.

READ ALSO:  “Tap from my grace and stop hating” – Nigerian singer, African China says as he shows off his new mansion

According to Bukunmi, the moviemakers who are supposed to teach and heal the ills in the society need to be healed and taught.

Speaking further, she mentioned that they, as moviemakers, who are supposed to preach against vices are also found wanting and need to be preached to for a change.

READ ALSO:  Cubana Chief Priest reacts to accusation that he assaulted a man who paid N1m to attend his club opening 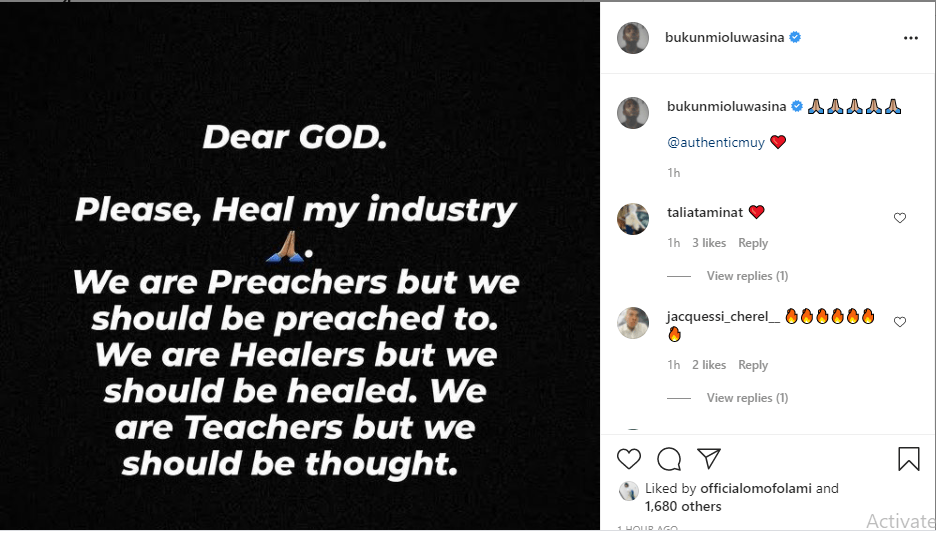 ‘We did the pushing of our baby together’ – Actress, Bukunmi appreciates her husband on father’s day