Popular Nigerian comedian Ayo Makun popular called AY, has dragged Nollywood actress Victoria Inyama over her comment on a blog while accusing the comedian of publicly going on a date with a mystery lady.

This comes after an Instagram blogger, Gistlovers, shared a video of AY and a mystery lady who attended the movie premiere of Williams Uchemba over the weekend.

The video generated several reactions online while some netizens slammed AY and his wife for flaunting their photos on social media creating a picture that everything is rosy in their marriage others including Victoria Inyama slammed the comedian for publicly disgracing his wife.

Reacting to this, the wife of the comedian Mabel Makun, while commenting on the post, expressed her disappointment at Victoria Inyama for jumping to conclusion and urged her to get busy and productive instead of following up lies with bloggers.

Also, reacting AY on his Instagram page dragged the actress for accusing him wrongly for something she did not witness but only assumed because a blog posted it.

AY referred to her post where the actress had preached about the need for people to watch the words that come out of their mouth and mocking a pain they have not experienced.

READ ALSO:  Etinosa reacts as Victoria Inyama slams her for giving birth out of wedlock

According to AY, it’s sickening to know that some people are bent on damaging other people’s reputation by making up lies just for fun/entertainment.

The comedian wrote: FIRST SLIDE: Victoria  inyama preaching to the world 4 days ago in her post on the need to watch the words that comes out of our mouth, and how not to mock a pain we’ve not experienced

2ND AND 3RD SLIDE: TWO DAYS LATER same Victoria inyama publicly commenting on a blog without watching her mouth on a pain I pray she doesn’t experience

4TH AND 5TH SLIDE: A fan who called me his role model in my DM and calling me a pimp while commenting on a blog…Just to mention but a few.

Times are hard in Nigeria and we know a whole lot of People are not happy with their lives, so they usually have all the time in the world to discuss yours.
Apart from all the social media entertainment, please know this today, accusations can ruin lives, so before you accuse and condemn, you better know what you are talking about. If you didn’t witness it yourself, then don’t assume everything you hear to be true. Only a fool speaks without having all the facts.
It’s sickening to know that they are people who damage your reputation by making up lies about you just for fun/entertainment. The pathetic part is that so many people believe them without finding out the truth. More so people who naturally don’t like you would also never want to hear the truth because they don’t want their illusions destroyed. @Victoriainyama YOU ARE DOING WELL. 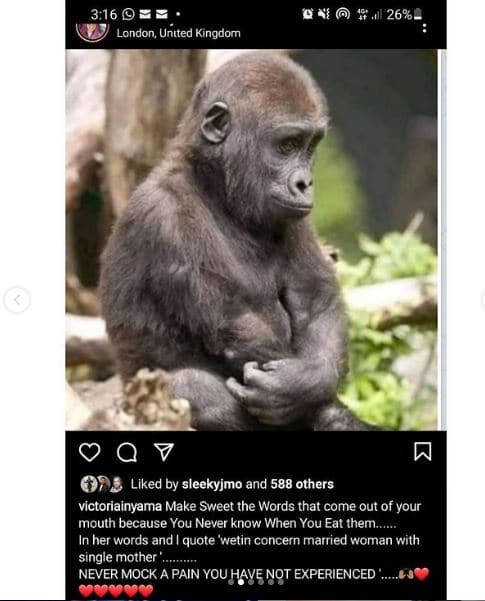 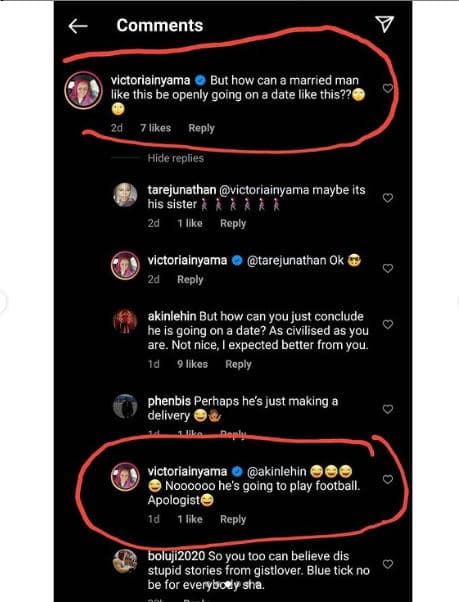 Victoria Inyama shades Etinosa for giving birth out of wedlock