Ace comedian and actor, Julius Agwu has shut down rumours of having health challenge as he stepped out in style for actress, Rita Dominic’s traditional wedding.

News reported in March that Julius Agwu and his wife had a challenging time when Agwu fell ill in 2015.

The ace comedian, who made a difference with his show, ‘Crack Ya Rib,’ had a successful brain surgery in 2015, recovered but then suffered a relapse in 2016 when he went to London for his show.

Though keeping a low profile since then, he attempted to revive his career by returning ‘Crack Ya ribs,’ and announcing his plans to celebrate 25 years in comedy, Agwu couldn’t get that done.

Though not looking as vibrant and hearty as he was before the ailment, Julius Agwu is said to be recuperating and everyone thought his wife was taking care of him.

To worsen his situation, Instagram blogger Gislovers alleged that Julius Agwu’s wife claimed she was tired of taking care of him and side chicks should also take turns to care for the comedian.

Gistlovers also alleged that Julius Agwu was fond of sleeping with numerous side chicks while making waves in the entertainment industry.

Hence Julius Aguw’s wife, Ibere, had also called on side chicks to take care of him since they still enjoyed the comedian’s money when he was financially buoyant.

It seems this reports were untrue as Julius Agwu looked agile as he stormed Imo State for his colleagues highly publicized wedding.

The comedian was also seen showing off his dance skills at the wedding which left many amazed. 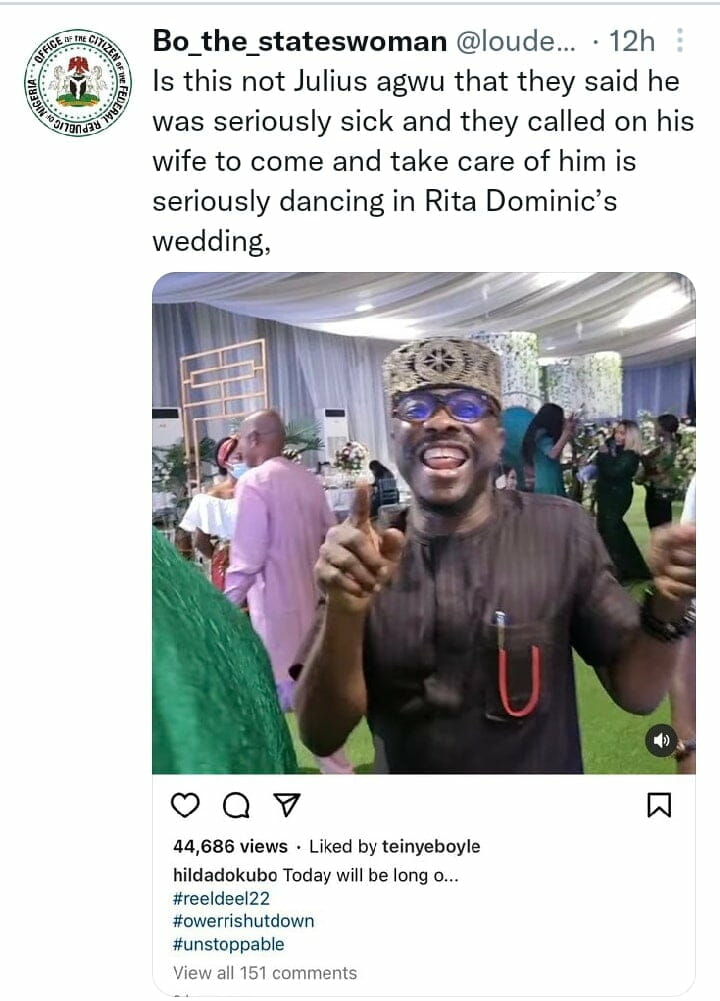