This comes a few hours after Pere bullied Whitemoney, an attempt to make him react and possibly get evicted from the show.

In a post shared on his Instagram page, Seyi Law recalled his encounter with Whitemoney back in 2014, describing him as the definition of a hustler.

Seyi Law said after the ‘Shine Ya Eye’ housemate became the face of his brand, they frequently shoot for several hours against the agreed time, and he would never complain.

According to Seyi Law, Whitemoney has practically done every job from being a photographer to a barber, taxi driver and producing music and tons of comedy skits.

White Money back in 2014 000…. I was amused by his name, I insisted to have his real name, of course, then he told me, Hazel. Long story short, he became the face of my brand on my website.

The reason for this story is simple. It hurts each time housemates try to debunk his stories as lies. This dude is the most hard-working guy I’ve ever seen! When we did the shoot, we would shoot for 10 hours straight non-stop, and he would bever complain.

READ ALSO:  BBNaija’s Tega Savagely Replies A Curious Fan Who Asked Whether She’s With Boma Or Her Husband

He practically did this for free clothes and whatever I give. He had no complaints. Back in Ojuelegba, I met him as a photographer then later saw him in a Salon as a barber, then the next thing, he was driving different cars for people, then he would do tons and tons of comedy skits.

Before you say, Jack Robinson, he was in a music band where he would drum and sing. He posted tons of videos with no one noticing him with less than 15 likes. So you can imagine the joy in my heart when I saw him in the house.

You see this guy. White Money is the definition of a hustler. From being a Fuel Station attendant to Modelling, Barbing and Driving, he has done it all.

Thank God for the grace to be in Big Brother House. He is the chosen ONE. Now, you know who I am supporting. White Money for the MONEY. 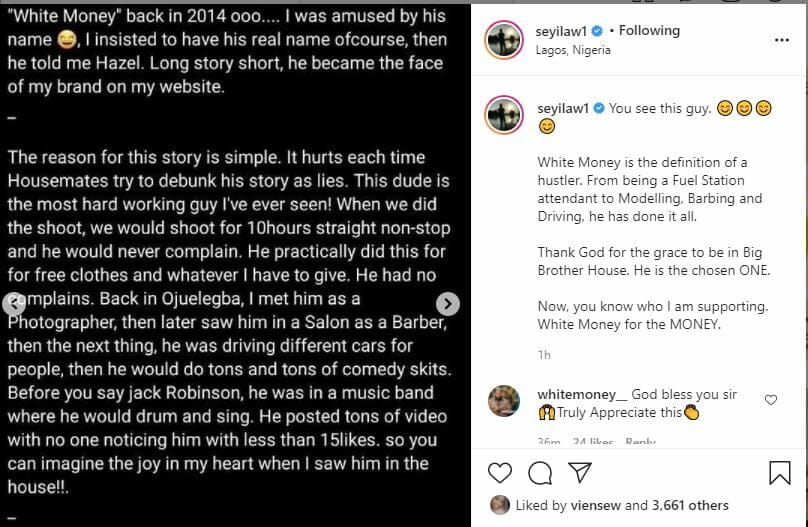