Confusion As Lady Bumps Into Her Ex-Boyfriend Who ‘Died’ Five Years Ago | Naijabulletin
BREAKING
Published on: October 27, 2021

A woman has narrated the shocking encounter she recently had with her ex-boyfriend who she believed died some years ago.

The lady simply known as Lisa, said that she bumped into her ex-boyfriend at the mall and was shocked to find out that he is still alive.

According to her, the man’s family made her believe that he died five years ago, and she got to discover later that it was because he had impregnated another lady.

The family faked his death and had a burial which Lisa attended, however, several years after, they met again and this time around he was married with kids.

She shared her story on Twitter and narrated what ensued when she met him with his wife and two kids.

Confusion As Lady Bumps Into Her Ex-Boyfriend Who ‘Died’ Five Years Ago..

Read her write-up below:

”5years back on this day,I received a call from my boyfriend’s mother telling me her son was involved in a car accident and dies on the spot, 2 make it short, she asked me not 2 attend his funeral since we we’re ain’t married,

”I remember mourning his death, used to cry to sleep, we dated for 10 months, everything was perfect, we loved each other but fake death happened .

I remember meeting his only friend l knew nigga console me even wiped my tears, showing sympathy towards me, telling me it will pass and shall go on with my life, he’s in a better place

I was so shocked seeing him today even told myself even they say people do look alike but that’s him. then l wanted to clear my doubts l turned and followed them, l call out his name, little l didn’t know know he turned back and say “yes can I help you? l went straight towards them”

As l was standing in front of him with my eyes straight onto his face, he said to his wife” babe can you and kids wait for me in the car I’m coming,

Me, so you not dead neh like your death was a lie? Nigga said l had no other choice but lying about death it was his mom’s ideas,

Went on and said he impregnated her and both families wanted him to marry her, so they got married later she gave birth to twins, I was out of words still shocked didn’t know what you say or do, Nigga plead me to come with him til by their car coz he doesn’t want troubles later

Being as stupid as l am l agree, when we get there he told his wife he knows me from the church and he said Lisa meet my family, he opened his wallet and give me R200 note And say it was nice to meet you after so long time”uyazifihla neh Lisa, Boom they left me standing in parking lot.” 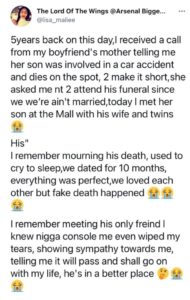 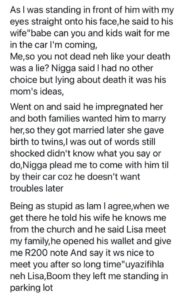 Confusion As Lady Bumps Into Her Ex-Boyfriend Who ‘Died’ Five Years Ago..

my ex is talking to her ex again, she can t let go of her ex, how to make her forget about her ex, when she talks about her ex, competing with her ex, she still loves her ex, she brings up her ex a lot, girlfriend meeting up with ex boyfriend,