A successful surgery to separate conjoined twin sister have been recorded in Turkey. The adorable nine-month-old sisters, named Elizabeth and Mary, left Cameroon for Turkey joined at the hip but have now been separated after a grueling 27 hour operation.

The mother of the twins praised the “extraordinary” medical staff in Istanbul who carefully planned the surgery on 3D models before getting to work on the girls. 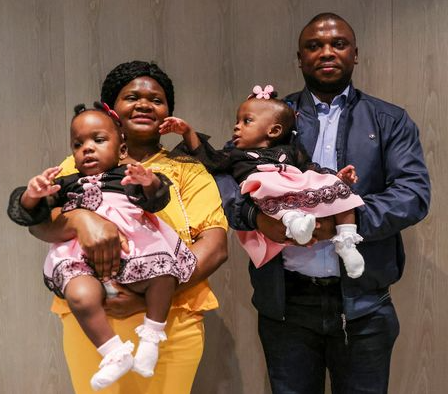 According to their parents, the girls who came out the womb attached were living in pain which led to them seeking medical help.

The twins’ father Richard Akwe said: “We were very saddened by the thought of our babies not being able to move around freely and that they were hurting.

“We were also saddened by the crying of our little girls when they were hungry while my wife tried to breastfeed them one by one, but they were a gift to us and we are dedicated to taking care of them in the best way possible.”