The 27-year-old model showed off her amazing present from the Manchester United legend, who recently added another record to his collection over the international break with Portugal, to her Instagram fans.

Georgina wrote alongside a photo of two of their four children getting their first glimpse of the gift:-

The Malle Vendome was designed to celebrate the opening of the new Louis Vuitton boutique on Vendome Square in Paris.

The 4ft 6ins high trunk has eight drawers as well as a mirror and a bust where Georgina can hang some of her most-treasured necklaces.

The pretty brunette draped herself in diamonds worth £78k at the beginning of last month when she arrived at the Venice Film Festival wearing four glitzy rings, floral necklace and earrings by Giardini Segreti.

Georgina, who posed for photos with fashion editor Anna Dello Russo at the glitzy event, was earning £10-an-hour when she met and started dating Cristiano in the summer of 2016.

She will also star in a new soon-to-be-released Netflix documentary focusing on her rags-to-riches life.

The mum-of-one, who helps raise Cristiano’s other three children as if they were her own, will admit in the documentary she is waiting for Ronaldo to pop the big question and put a ring on her finger. 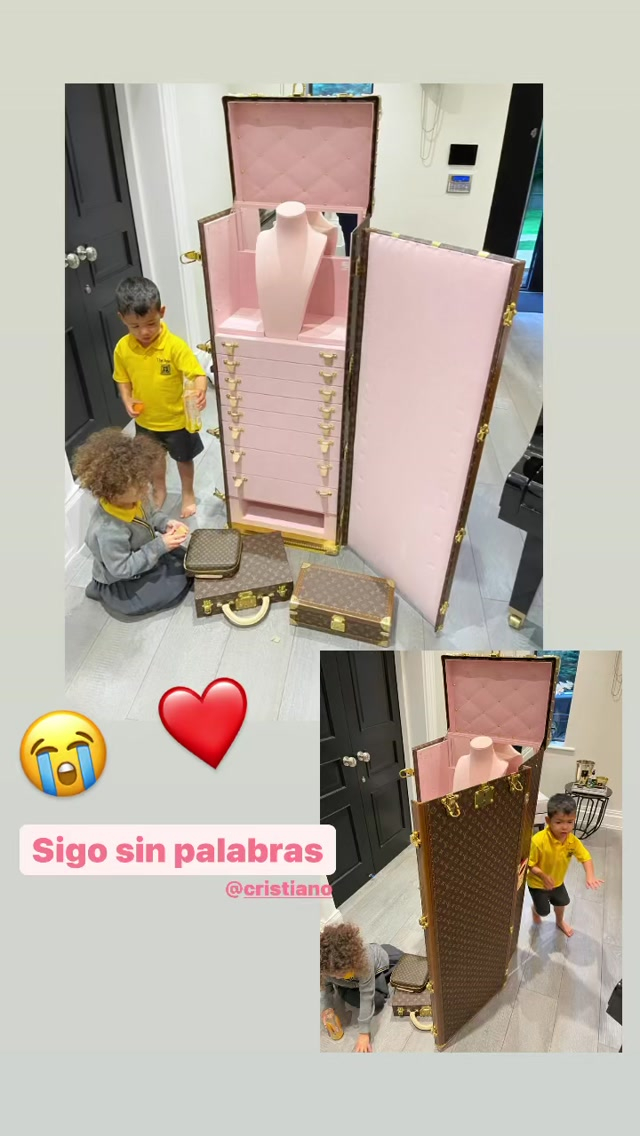 And that would no doubt take pride of place in her new jewellery trunk.

She included the admission in a clip for the show which she posted on Instagram last month.

Asked in Spanish over dinner on a boat with friends when she was going to marry the 36-year-old, Georgina initially said ‘no’ as she grinned before appearing to nod her head towards the Portuguese goal-scoring machine and add: “It doesn’t depend on me…..I wish.”

The pretty brunette used the word ‘Ojala’ in Spanish which is of Arabic origin, deriving from the expression ‘Mashallah or ‘Masha’Allah’ which literally means ‘Should God will it’ and translates into English as ‘Hopefully’ or ‘Let’s Hope So.’