CSOs, pro-govt protesters clash over N300m houses for Oshiomhole and Odubu › Naijabulletin
BREAKING
Published on: September 29, 2021
There was pandemonium on Tuesday at Ring Road in Benin following a confrontation between protesting members of civil society organisations and another group of protesters over the provision of N300m worth of houses as retirement benefits for the immediate past Governor of Edo State, Adams Oshiomhole, and his deputy, Dr. Pius Odubu, by the House of Assembly. 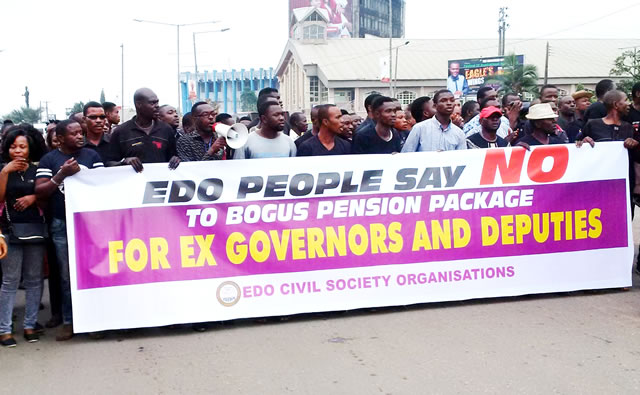 The House had last week amended the 2007 Pension Rights of the Governor and Deputy Governor Law to include the buildings, which could be located anywhere in the country, among other pension benefits.
While the Speaker of the House, Dr. Justin Okonoboh, maintained that the new provision was justifiable as there was an existing law on pension benefits for former governors and deputies, even as he said that the amendment had not been assented to,  the opposition Peoples Democratic Party and civil society organisations condemned the action.
The anti-N300m-pension- package protesters, under the Edo Civil Society Organisations, had converged on the museum ground on Ring Road as early as 8am and later marched towards the Anthony Enahoro House of Assembly Complex to express their rejection of the new pension benefits and called for its reversal.
But no sooner had the group reached the Assembly complex than they were confronted by another group of protesters, who were apparently in support of the lawmakers’ resolution and prevented the CSOs from gaining access to the major entrance of the building.
The “pro-government” protesters suddenly surged violently towards the protesting CSOs and chased their members away from the arena, under the watchful eyes of security operatives, who had taken position at strategic locations around the complex.
Many of the anti-N300m-pension-package protesters, who were all dressed in black, fled for their lives while one of them was said to have passed out but was later revived.
While others sustained injuries from the attack which lasted for about an hour,  a vehicle conveying some loudspeakers used by the CSOs during the protest was vandalised.
Many passers-by on Sapele Road and Sokponba Road were also seen scampering to safety for fear of being identified as members of the civil society organisations.
Spokesperson for the civil society groups, Osazee Edigin, claimed that his members were attacked by thugs allegedly sponsored by the government rather than a different  group of protesters.
“They mobilsed thugs to attack us. We are trying to revive a guy who fainted. The thugs have taken over Ring Road. They were mobilised by government officials,” Osazee said.
But the government denied having any link with the attack on the protesters over the “mansion bill,” and described the claim by the CSOs as malicious.
The Chief Press Secretary to the Governor, John Mayaki, said that the state government was “too decent” and focused on delivering democratic dividends to the citizens and would not belittle itself by resorting to violence.
Mayaki said, “Suffice to say that this government is too decent and responsible to engage in anti-democratic means of sponsoring hoodlums to attack citizens who we swore to protect.
“We recognise the rights and freedom of citizens to express their opinions on public issues and would not do anything to infringe on that. We believe in popular participation, engagement and in the tenets of democracy.
“There is no iota of truth in the report as government will not, in any way, attempt to gag the people’s freedom of expression, association and movement as enshrined in the constitution.”

#BBNaija: Bassey has been evicted from the House.