Actress Eniola Badmus has been queried by JJC Skillz for flaunting the N5million cash gift she got as a birthday gift from his wife, Funke Akindele.

Sharing a video of the wads of N500 notes on Instagram hours ago, Eniola Badmus wrote “Thank you LAFUNKY for the cash gift I did not see this coming” and action that got JJC Skillz responding saying “Why u Dey loud am. Hush hush”

Although Funke Akindele has not commented on the post, fans have reacted to JJC Skillz’s remark. 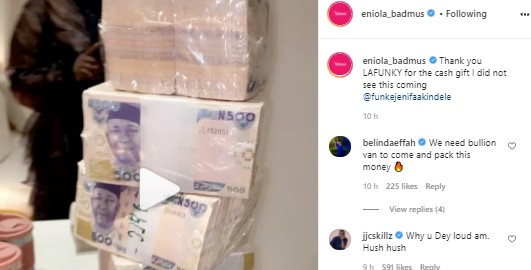 One Manifold wrote “This is what they call friends with benefits not with envy. I love this friendship. I pray no enemy will come in between you guys.”

One Manizie wrote “bros pls allow her oo.. She has a very good reason for doing this.. God will continue to bless your Family”

One Bakare wrote “Jesu!!!!! Baba pls let her loud am…..when me I have been running around because of 50.000. haaa na friend them be oooo”

While singer Nikki Laoye wrote “Aww God bless dear sis @funkejenifaakindele for celebrating you @eniola_badmus her friend this way. It is a fantastic gift in these times o”

IN the wee hours of September 8, 2021, Nollywood actress Funke Akindele penned a heartwarming tribute to her best friend and colleague Eniola Badmus as she clocked age 44.

Funke Akindele also expressed appreciation to Eniola Badmus for constantly reminding her to have fun.

The mother of two also teased her best friend that she would not be sending her gift because she is the latest riches babe in town and money spraying machine.