Nollywood actress Eniola Badmus has warned that those making several promises on taking care of Malik, the son of late Davido’s associate Obama DMW should not fail.

Following the demise of Obama DMW, sensational female singer Tiwa Savage and many other friends of Obama had promised to ensure that he graduates from the university and do not lack anything financially.

Also, after the death of Obama DMW was reportedly linked to alcohol and cigarette. However, Nigerian singer Peruzzi, Samklef and many others took to social media to announce they have quit smoking and alcohol.

Reacting Eniola Badmus in a post shared on her Instagram story said that she had been seen many promises following the death of Obama.

She advised that people should keep to their promises and ensure they do not fail.

She wrote: I see so many people writing RIP cigarette or I got you Malik (Obama’s son) for life. Lets not promise and fail!

Naijabulletin News recalls that Obama DMW reportedly died on Tuesday, 29th June evening, over heart failure after driving himself to run a test and checkup over difficulties in breathing.

He was laid to rest in his hometown in Epe, Lagos State 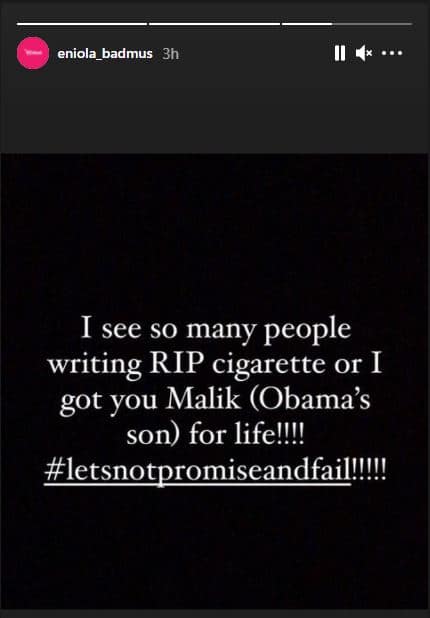