Few weeks after ending her second marriage, Etinosa drags men who cheat on their wives | Naijabulletin
BREAKING
Published on: October 20, 2021

A few weeks after her second marriage ended, Etinosa idemudia has expressed her displeasure towards men who cheat on their wives.

According to the actress, men deceive themselves by getting married to a woman approved by society and not who they really want.

Speaking further, the mother of one said that these type of men are hypocrites and pretenders for getting

married to the society’s spec and still go out to cheat on their own spec.

Taking to her Insta-story on Instagram to say this, Etinosa wrote;

your soul mate, your fellow drug and alcohol addict that truly makes you happy.
Are you not deceiving yourself? Why don’t you just marry your spec and build your home in love and happiness?? Why can’t you just be true to yourself and marry not for society validation??
A lot of pretenders and hypocrites causing themselves and their partner’s grief. Same goes to men who

marry model coke bottle but their true spec is plus size fat. Same for men who marry women when their

true spec is men… All of you continue deceiving yourself” 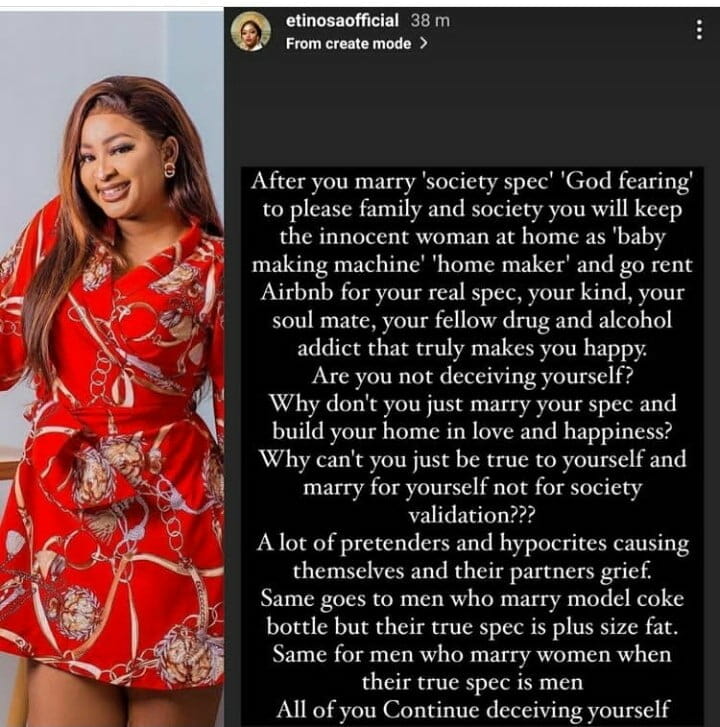 Etinosa drags men who cheat on their wives..