Nollywood actress, Tayo Odueke popularly known as Sikiratu Sindodo has aired her view on how people use each other to get what they want.

According to the mother of one, people use others to get what they want and they stop once they have achieved their aim.

Speaking further, Sindodo said there is no love anywhere and everyone is just playing along. She however urged her followers on Instagram not lose any real friend they have. 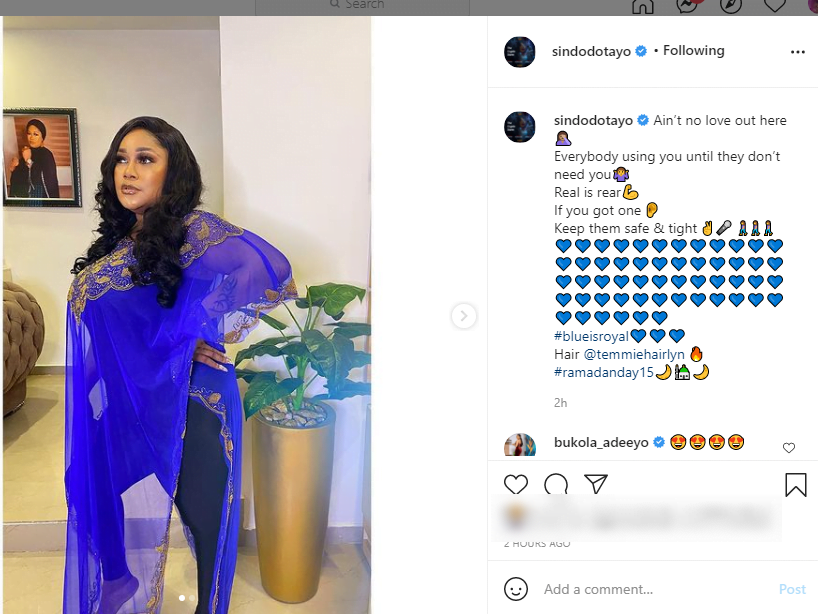 Naijabulletin recalls that a few days ago, Mercy Aigbe also took to Instagram to blast people who come to social media to deceive people with their fake their personality.

According to the mother of two, lots of her colleagues with stinking character in real life come on social media to pretend to be nice. Describing this act, Mercy said social media is a scam and nobody should fall for what they see.

In her words;
“Me: when I see one idiot whose character actually stinks in real life coming to social media to act like an angel, and some gullible people falling for it!
Msheeeew Social Media na Scam, the more you look the less you see! Gba be! E ko shi Danu!”

Dimeji Lateef breaks down, spills on being tired and frustrated

‘If you don’t like her, block me’ – Nkechi Blessing’s politician boyfriend warns his family and friends