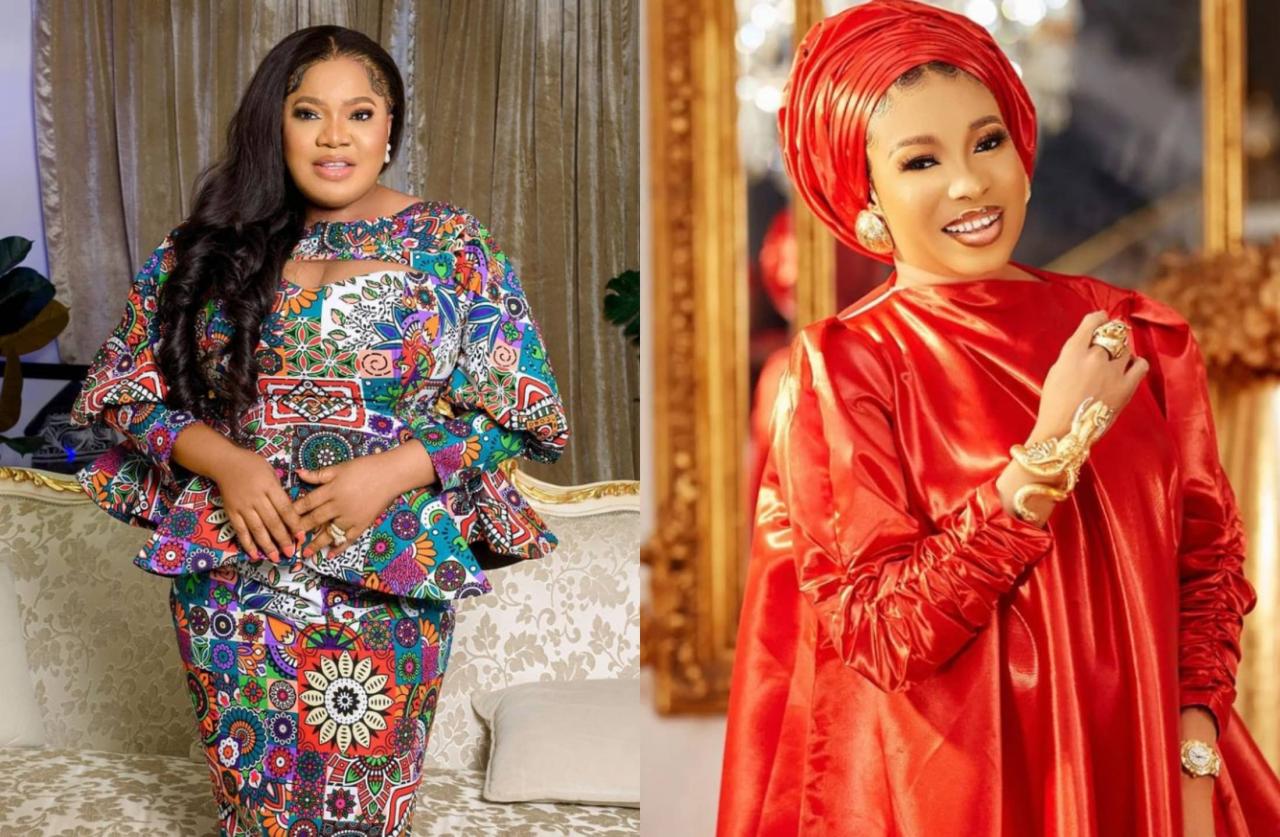 Nollywood actress Toyin Abraham has received accolades from her fans for resolving her beef with colleague Lizzy Anjorin. 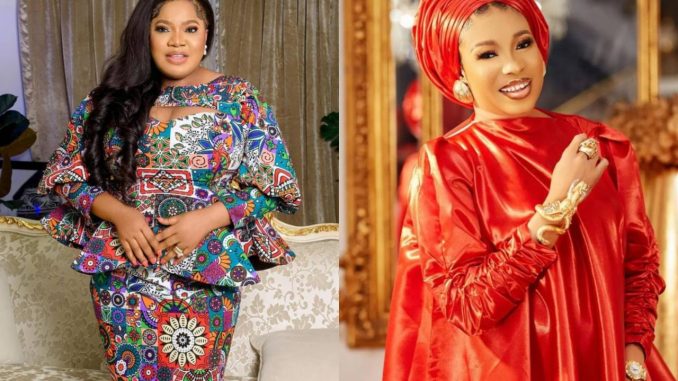 The two who have been at loggerheads for years over rumours fueled by their fans have finally reconciled.

NB reported in 2021 that after Toyin had addressed her issue with controversial actress Lizzy Anjorin.

This came after Lizzy Anjorin revisited her beef with Toyin Abraham, claiming that Toyin not only mocked her in the past but spread false rumours about her and called her child an imbecile.

Lizzy averred that there were no bad fans on Instagram, pointing out that many of her colleagues opened fake Instagram accounts to troll and attack each other, including Toyin Abraham.

In an Instagram Live session with Iyabo Ojo, Toyin Abraham admitted that she had never trolled Lizzy with any fake Instagram page or paid a blogger to attack her.

According to Toyin, her fan attacked Lizzy Anjorin, and she also reached out to the fan not to involve her with any social media drama.

Toyin Abraham, who broke down in tears, said she was responding to the issue because she wanted to protect her son and husband as Lizzy dragged her husband into the issue.

Giving an update on their beef, Toyin Abraham took to her Instagram page on Saturday to clear the air on their beef.

Toyin revealed that she had involved the police in it, and they had done a thorough investigation.

In a statement on her Instagram page, Toyin stated that it was important for her to make clarifications and share information with the public, especially after the conclusion of the police investigation.

Toyin stated that she and Lizzy don’t have any issues as the investigation revealed that she did nothing wrong to Lizzy.

Toyin disclosed that Lizzy ran with a fan comment which didn’t come from her.

At the station, the two actresses tabled their grievances, and she apologised, and they have since moved on.

“It is important that I make this clarifications and share this information with the public especially after the conclusion of police investigation.

Lizzy Anjorin and I, we no longer have issues. Yes, I had to get the police involved. The investigations revealed that I did not wrong her. She ran with a comment of a fan which did not come from me. At the Police station, we tabled our grievances and she apologised and we have since moved on.

This clarification is important for some reasons and the Police have concluded their investigations and I need to let the public know.

And please, I am begging anything that has to do with me and Lizzy is now in the past. I beg you. And I also want to beg everyone, every child is my child no mater how the case may be please kindly take children out of it. I am on my knees. I am begging, Thank you and love you all. Thank you.

Lastly I want to say a huge thanks to all my fans for always supporting my brand and loving me unconditionally”.

Her fans, highly impressed with her actions, took to her comment section to sing her praises.

Many applauded her for reconciling with the actress despite the nasty things she spilled about Toyin.

simon.toyin: I love this God bless you both

i_am_tiwatope_2: My love for thus woman

funmilayohevlin: Love you so much Toyin ur humility and that of ur husby is great God bless you

babatundeteeteelayo: Love you world best, but pls don’t be her friend ooo, don’t have anything to do with her, I’m happy for d peace

Recalls Toyin Abraham had stated that she was never and can never be friends with colleague Lizzy Anjorin.

The rift between the actresses started in 2007 when Lizzy Anjorin allegedly accused Toyin Abraham of running the popular blog Gistlover, and several Instagram accounts to troll her and her other colleagues in the industry.

She also said Toyin fed the blog a fake story about her being arrested on her way to Saudi Arabia for carrying cocaine which is not true.

The fight became more intense after Toyin Abraham had her baby Ire and Lizzy was accused of not sending a congratulatory message to her. This resulted in a feud between Toyin Abraham’s fans and Lizzy Anjorin, who rained insults on Lizzy and Toyin kept mute about the whole issue. This made Lizzy so angry because, according to her, Toyin had the power to tell her fans to back off, but rather, she kept quiet, and Lizzy didn’t find her actions funny at all.

The war continued on social media as Lizzy was not ready to back out until the leaders of ‘TAMPAN’, Mr Latin, the President of the Theatre Arts and Motion Picture Association of Nigeria (TAMPAN), in the company of Yinka Quadri in a video called both actresses to stop fighting and if they continue to fight on social media, the association would be forced to intervene.

This made the whole fight go down a bit until Lizzy Anjorin had her baby in the U.S. A and reignited the feud with Toyin Abraham through a viral video.

She revisited the bullying and trolling she had been facing from Toyin’s fans about her getting delivered of a newborn baby in the U.S.

According to Lizzy, Toyin created fake Instagram accounts to bully her and claim that she did not carry the pregnancy herself or give birth in Florida, U.S.A.

Well, the two parties were invited to a live Instagram session by popular blogger, Esabod to settle things amicably.

At first, Esabod was angry with Toyin Abraham and her fans for how they had been attacking Lizzy Anjorin. She was also displeased with some of the bloggers’ intervention on the issue. Esabod also stated that she had tried severally to talk to Toyin on the issue 2 years ago, but Toyin ignored her message on Whatsapp. As the live video went on, pretty actress Iyabo Ojo joined Esabod on Instagram live video. As she was about to narrate what she thought might have caused Toyin Abraham and Lizzy Anjorin’s rift, Toyin Abraham called Esabod on her other line, and there was a serious war.

Many people called Esabod to apologise on Toyin’s behalf, but she refused and ended the video.

Then the story took another turn when she started another live video; this time around, her mood had changed compared to the first video, where she was angry. She could call Toyin Abraham and Lizzy Anjorin individually to settle the matter once and for all.