Recall that popular blogger, Gistlover dropped the names of some Nigerian actresses who had reportedly been involved with Apostle Johnson Suleman intimately.

There had also been series of allegations leveled against Apostle Johnson Suleman after videos and messages of ailing actress Halima Abubakar surfaced online.

Amid the allegations and the issues between Halima Abubakar and Apostle Suleman, Gist lover via its page dropped the names of some Nollywood actresses who the blog claimed had slept with Apostle Johnson Suleman for money.\

Debunking the report, Georgina Ibeh took to the comment section of one Gistlover’s handle and stated that the accusation is wrong. She further appealed to the blogger not to involve her name. 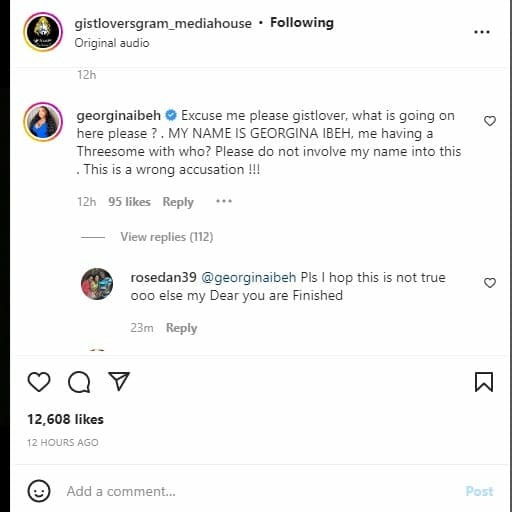 Recalls that Mr Jollof ranted about the alleged criminal activities of the blogger, who he referred to as a bandit.

According to the comedian, the sum of N10m was paid to the blogger to shut down the pastor’s sex scandal but Gistlover collected the money and still went on to blackmail the clergyman.

Angered by this, Mr Jollof slammed the blogger and gave him a seven days ultimatum to refund the money, vowing to expose him with evidence of all the payments he has received as bribe.

He also urged anyone who has paid the blogger in the past over their dirty pasts, to speak out so that they can bring down the blogger together.

He spoke at length through a video which he captioned: ‘Gist Lover na Bandit for social media !!! Abeg refund the 10million them pay you Abeg because you crop out the place when you say you no Dey refund !!! So we know your next move Abeg because we all go open our yansh like Uncle Bob 😂😂