How Davido shunned Sanwo-Olu’s invite to a concert
BREAKING
Published on: December 2, 2021

How Davido shunned Sanwo-Olu’s invite to a concert…

One of the Feminists who were the backbone of the EndSars protests, Rinu Oduala, has revealed Nigerian singer David Adeleke popularly called Davido, cancelled a concert with the Lagos State Government.

This singer made this claim while diverse reactions have continued to trail the arrest of protesters and police brutality during the #EndSar memorial at Lekki Tollgate on Wednesday 20th October 2021.

In a shared on the microblogging platform, Samklef said the Lagos State Government recently did a show, and some Nigerian celebrities were at the event.

Samklef described some Nigerian celebrities as activists during the day and friends to the government at night; hence they are all using the movement for their own promotional game.

The singer also questioned how many celebrities had visited families of victims of the Lekki Massacre and urged the youth to change their mindset and see the government as a public servant and stop worshipping them.

Reacting to this, Rinu, in a post shared on the microblogging platform, said a few days ago, the Lagos State Government organised a concert and invited many Nigerian celebrities.

According to Rinu, Davido shunned the concert after realising the Lagos State Government were one of the concert’s sponsors.

I remember Lagos State Government organised a concert a few days ago and covertly invited celebrities. The moment Davido found out they were one of the sponsors, he cancelled! 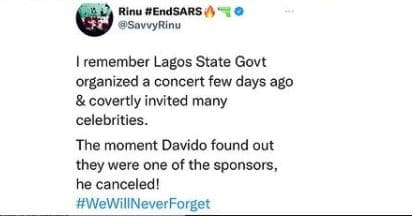