2face and Annie Idibia’s marital crisis will not be have been this full blown and made a mess on social media if late singer, Sound Sultan were still alive.

A close source who spoke to Kemi Filani confirmed that Sound sultan played a huge role in holding the Idibia family together.

“He is the always the run to person for Annie when issues arise and he just somehow always has a way of speaking sense into her or 2baba to let peace reign. Sometimes when their fights get very heated even in the middle of the night, he will come through when he is called upon. He was a huge part to the success of the union so far, you will not understand but those who really knew them knew……Annie will miss him the most because he was the only friend that had the access to 2face’s Mumu button and got him to soft pedal.” our source revealed.

recalls that the late singer, Sound Sultan passed away in July, 2021, at the age of 44, following his battle with Angioimmunoblastic T- Cell Lymphoma, Annie Idibia couldn’t sleep.

Annie spent sometime off social media to mourn him and then took to her Instagram to pen down a tribute for the music star and her husband’s close friend.

She wrote: Still can’t sleep … Finding it hard to breath. Oh My Lanre … Oh my dear sista “A boo” Our Lives can’t be same again !”

See some of her posts in honor of him: 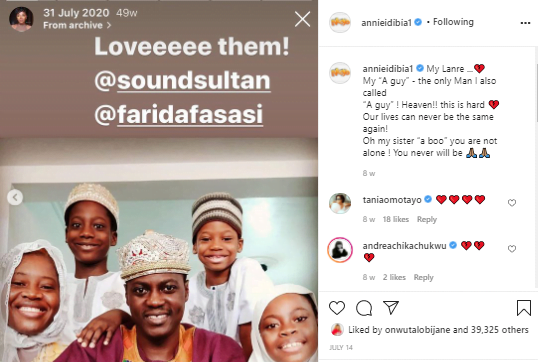 Her husband, 2face Idibia, had earlier in a post shared on Instagram said the news of Sound Sultan’s death is still unreal, and he could not bring himself to write a tribute for him. He promised the deceased that his family and would be safe and live a good life.

Barely two months after his death, the first marital crisis of the Idibias was exposed on social media after Annie claimed to be exhausted and tired of 2face’s disloyalty.

News recalls that Annie Idibia took to her Instagram Stories on Thursday, September 2, 2021, where she called him out over their relationship.

“I am a patient woman. I am not a fool innocent. Your family never loved me from the beggining. No matter how hard I tried. I was never worthy to them,” she wrote.

“I have made so many sacrifices for you and all your children. God knows I have I tried. Your baby mamas constantly use your children as an excuse for all sort of rubbish.”

I try to stay gracious. You are not the first man on the planet to have kids by different women. You can do better. Everything I do is to show the good human that you are.”

“But today, this move done by you, Efe, Frankie and your family is unacceptable.”

“What kind of man takes his kids to Disney and spend nights in the same apartment with his kids and their mother? How many times have you gone to see your kids with Pero? and she stay with you and the kids under the same roof?”

Meanwhile, on September 8, 2021, 2face Idibia asked Nigerians to let him and his family be.

“I admit that bringing our personal issues on social media was not cool but I will not sit back and watch everybody have a free for all battle here in the name of love or solidarity.

None of us is perfect. I will like to urge our families and supporters to stop the madness and the public to please respect our privacy and our kids, let us deal with our issues internally. I take God to beg una.” he wrote on Instagram.

“You only got the ring, cool down” Annie Idibia receives knocks for attacking 2face Idibia and babymama, Pero

“Your juju is finally catching up with you” – Tuface’s sister-in-law, Rosemary Idibia joins in as her husband, Charles Idibia join continues slamming Annie Idibia