These days Taribo West is home alone in his Opebi, Lagos mansion, away from the glamour and limelight he once enjoyed as a superstar footballer. 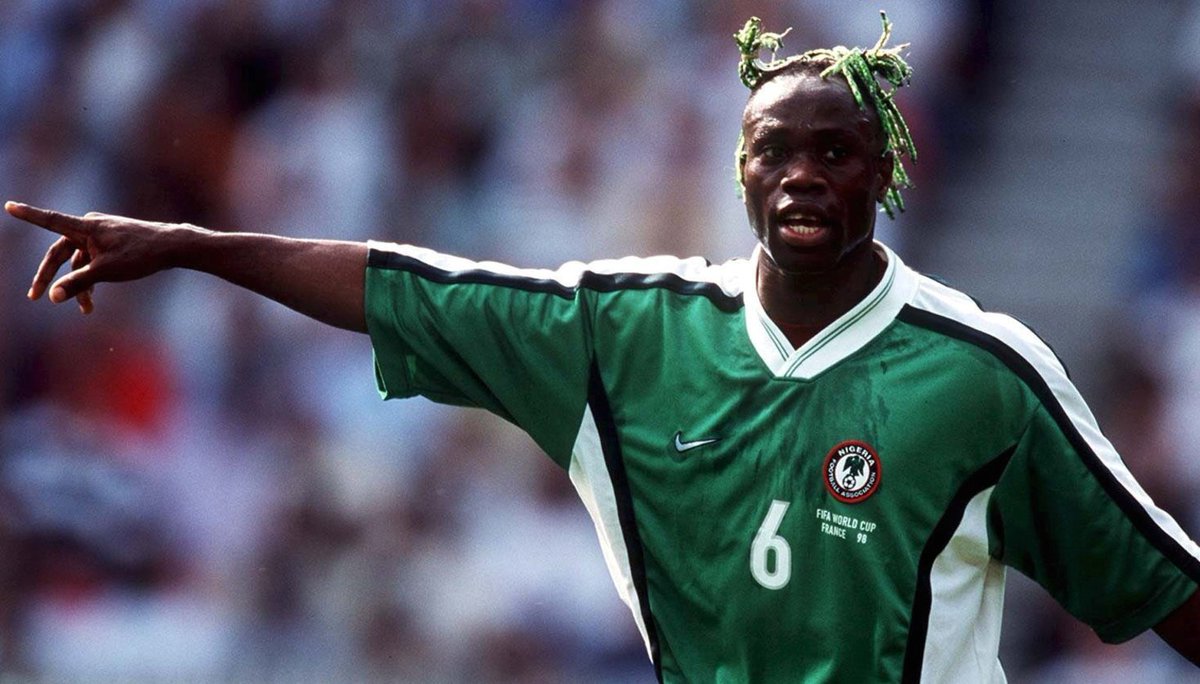 He no longer wears the flashy and oftentimes crazy hairstyles that stood him out in the pack. Baldness has set in and he is now clean-shaven. He is no longer “fearfully made” as he was once described by a comedian, because of his looks.


In his footballing days, Taribo was truly fearsome, an attacker’s nightmare. He had the crunchy tackles and would kick you on and off the ball, and force you into intimidation with his looks, gestures and power.


Today, he is a far cry from that personality. What you have now is the born again Taribo West; the pastor and founder of Shelter in The Storm Miracle Ministries of All Nations.“I spend most of my time at home meditating. All I want to do is to keep spreading the gospel. In my own little way, I have been into evangelisation visiting places like Ughelli and within the Orile community, Ajegunle and so on. God has been kind during these visits to preach the gospel to people who are yet to receive Christ. We believe He will take us globally very soon,” Taribo said.Fascinatingly, the Rivers-born preacher prefers taking the gospel mostly to the ghettos. It might not be unconnected with his childhood. Born in Port Harcourt, he grew up in Shomolu, a neighbourhood in Lagos, where he was involved in gang fighting but with a reputation as a footballer of note in the area.Taribo lived life on the streets and witnessed attacks, robberies, fighting and all manner of vices on a daily basis. But he had a rethink of his dangerous lifestyle after he watched his best friend stabbed — by a rival gang— and bled to death.


Afterwards he devoted more of his time to playing football. After a stint with Port Harcourt side Sharks, he moved to Julius Berger in 1992 and spent just a season with the Bridge Boys, before sealing a dream move to French side, Auxerre.Perhaps his childhood experiences informed his decision to reach out to the youths in such areas.“Your background experience counts. We turn to God to give us direction. I’m happy how far He has taken us.“The gospel is for the poor, rich and noble. Part of the gift God gave me is to reach out to the downtrodden. It is good if you can reach out to the downtrodden, preach the gospel to them and try to meet some of their needs through humanitarian services. I’m grateful to God for using me to spread the gospel across to these people,” he said.On getting to Europe, Taribo would find himself entangled in another life of charms and superstitious beliefs.A move from Auxerre to Milan saw him playing for rivals AC and Inter — one of few players to achieve the feat — in a three-year stint in Italy.With a new-found life of affluence, the big defender paid huge sums of money for him to be supplied charms to win games, protect him from career-threatening injuries and also to be foretold the results of matches before they were played.The 1998 UEFA Cup winner used to burn candles and hold a magical stone from Israel before games but he is bewildered that people are reluctant to publicly identify themselves with the practice, saying players and officials are deeply involved in the act.Taribo said, “Of course yes (I was involved). I don’t know why people decline to talk about their involvement with charms. Football has to do with a lot of powers. When there are big events, you look at the stadium, you see people, fans invoking all kinds of things; magicians are there, voodooists are there.“In my playing days, when I was ignorant, I used to get some mallams and babalawos (traditional doctors) to make charms for us, which we took to (national) camp. Sometimes it worked, sometimes it didn’t.“In some clubs, before every game, the president or leader of the club will give you a lucky charm to play with. They will tell you to put it in your boots or socks and play. It’s their superstitious belief; that it can help them win matches.“There are some coaches who are connected to African magicians and soothsayers from Senegal, Burkina Faso, Zaire or even Nigeria. These people are consulted to give these coaches results of games even before the matches are played.


“These people see strange things and they can tell you with their magic and charms, what the outcome of a match will be. People believe and use it. It works for those who believe in it. I saw it, I experienced it, I was with players that used it and I used it. So, why are people denying it? There are charms and rituals in football. It still exists.”When Patience Ikemefuna, an evangelist who lives in America paid Taribo a visit in Milan, it marked a new phase in the 1996 Olympic Games gold medallist life.Ikemefuna was perplexed when she discovered that Taribo was deeply involved in occultism. There were charms in his wardrobe and other parts of his apartment. Even though her host resisted initially, she convinced him and after several praying sessions, Taribo gave his life to Christ.Today, even though they are not biologically related, he refers to Ikemefuna as “my sister.”“God used her to change my life and ever since, my life has never been the same. I’m grateful to her. When I had an encounter with God and I became born again, I discovered that these powers were powerless. It was an avenue to collect money from us. There are lots of voodoo practices in football. If you are not with God, you have to be with the devil; with the devil they come with everything,” he added.What is the difference between life in Christ and one filled with charms?“You can’t compare,” he said. “When I was living that ignorant life, I was in darkness. In the darkness, the devil can give you what God can also give you, but he will give you without joy and peace. Eventually, you will end up in sorrow. But when you experience the joy of Christ, it adds no sorrow.“The joy of the Lord is not only my strength; it gives me everything I need in life. The love of Christ comes with freedom, success, favour, expansion and a better life. When you have all these, you have everlasting peace. That is why I am comfortable today and I’m happy how God has seen me thus far.”But being a pastor doesn’t mean he is free from temptations. In fact he realises that there are even tougher battles to fight as a cleric.“Temptation is permanent; it’s there every hour, every day but if you begin to study the Bible, there are principles that God has laid down for us. If you follow this, the devil will not keep you.“From my house to the bus stop, I may see a young girl not properly brought up, dressed half- naked walking on the streets. You will see temptation right there. But you have to pray for God’s grace to overcome the temptation.”After a career that has seen him play football in Nigeria, France, Italy, England, Germany, Yugoslavia, UAE and Iran, Taribo has seen it all and aptly names his church a shelter.He added, “We told ourselves to fast and ask God for a name for the ministry. In the process, a sister came up and said a voice told her that we should call the ministry Shelter in The Storm Miracle Ministries. That’s how we got the name.“During my journeys, God created a shelter for me and transferred me into that fold. There are lots of natural disasters everywhere in the world in these last days. There are crisis in Asia; there is terrorism and sectarian groups springing up. People are migrating from all over the world to Europe because of fear. In the midst of all these, God has created for everyone a shelter, where everything in your life will be restored again.”Even though he is no longer actively involved in the game, which gave him the good life and saw him resident in some of the world’s biggest cities, the Super Eagles — with whom he played two World Cups and two Africa Cup of Nations — is still very dear to Pastor Taribo West.“We need to pray for the team and I have taken it as an assignment to pray for the team. The national team is part of my body, it’s my family.”Culled from Punch

I have 27 children — and counting, says Kano rep

BBNaija: Tacha opens up on what happend at the diary room during fight with Mercy (WATCH VIDEO)

Michael Jackson’s daughter, Paris Jackson, hints on being bisexual as she “dates girls”