Mavins Records boss, Michael Collins Ajereh, popularly addressed as Don Jazzy, has finally revealed his decision to wait for his long time crush, Rihanna, who is now a proud mom of one. 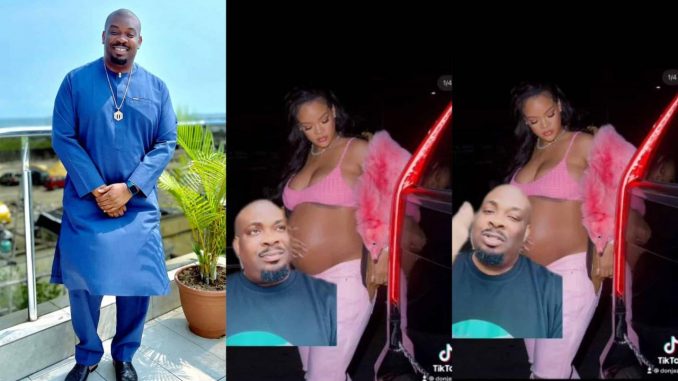 A video making waves on social media captured Don Jazzy lamenting his loss of Rihanna and making a vow of waiting even if it takes him a decade.

Sharing the video on his verified Instagram page, Don Jazzy claimed he is not losing hope.

Brodashaggi, Erica, Rebecca, Scarlet Gomez and others encouraged Don Jazzy to let go of his obsession with Rihanna.

Naijabulletin news recalls that the internet was buzzed with mixed reactions when Don Jazzy stormed the White House in the United States of America.

This was after Don Jazzy roused the internet with supposed pictures of his visit to the official residence of the American President, the White House.

Many took to the Mavin Record boss’ official page to celebrate and congratulate him. Celebrities like Monalisa Stephen, Ikechukwu, Woli Arole and others applauded Don Jazzy’s move.

A netizen called out Rihanna to show herself as Don Jazzy is in the US to pay her bride price.

News recalls that Don Jazzy announced the death of his mother on Friday, July 22, 2022, via his social media page.

Don Jazzy revealed that his mother left him with unimaginable pains when she breathed her last after a long battle with cancer.

He described the deceased as a fighter that refused to give in even in the face of a deadly health condition.

He wrote: “I lost my sweet mother this morning. The matriarch of our family. My supporter and backbone @indianpicolo.

“I am beyond devastated. I have never felt pain like this in my life but I am consoled by the good life she lived. She was loved by everyone that ever met her.

“She was so strong till the last minute for us even while she battled with cancer.

“I have never typed a more difficult caption in my life. Please pray for our Mums soul to Rest In Peace and for strength for my dad, my siblings, her grandchildren and our entire family to bear this loss.”

Nigerians console Don Jazzy as he vows to wait for Rihanna