Following the death of singer, Davido’s Manager, Obama DMW, his son, Abdulmaleek has taken to Instagram to pen down an emotional tribute to his father.

NB recalls the sad news of Obama’s death on Tuesday evening, 29th of June came as a rude shock to many.

According to reports from close friends, Obama drove himself to the hospital to run a test and checkup over difficulties in breathing. The artist manager was said to have reportedly died in the hospital.

Taking to his Instagram page to pen down a tribute to his dad, Maleek said that he has never been in a pain like this before and he does not think he can be strong to bear the pain.

READ ALSO:  Israel DMW replies fan who asked if he would kill Davido for N30 billion

The teenager also mentioned that his father, Obama taught him to be a strong man and he promised to always keepm in safe in his heart.

“Dad! wait why am I even saying dad… you were my brother, you were my twinne we so much looked alike… you made me understand that I am a strongman you taught me to be strong but sorry I’m letting you down. I can never be strong enough to accept that you are no longer here… I miss you! Abdul Maleek loves you so so so much… I have never been in a pain like this before…

Dad, I won’t immortalize you in the stars, because they fade away. I won’t remember you with a poem, for it will be forgotten one day. I will just keep you safe in my heart so that you are with me in every way. I miss you” 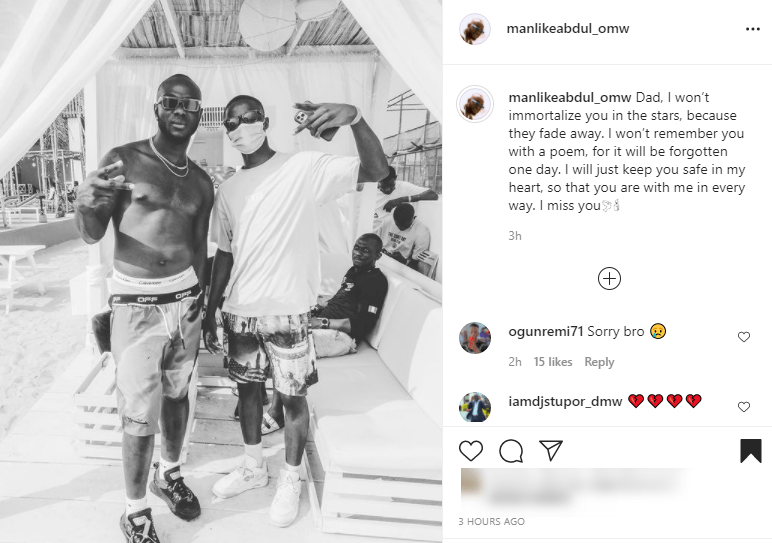 I can never be strong to accept this pain’ – Obama DMW’s son..