“I dont fall in love again, I stand in love” Liquorose disses Emmanuel days after shading her newly acquired backside

Big Brother Naija, season 6, Shine Ya Eye’s second runner-up, Liquorose, has reacted to the shadings of her former boyfriend, Emmanuel, on social media. 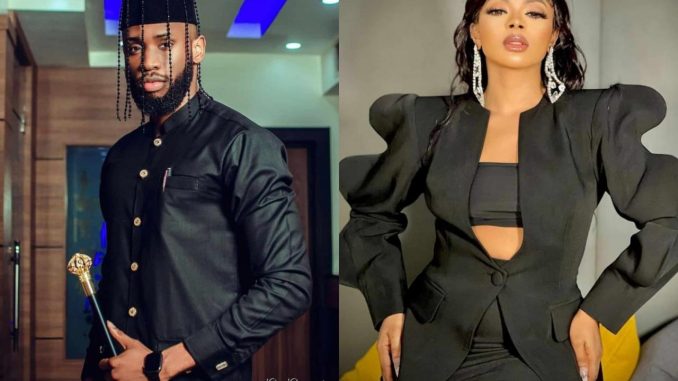 A few days ago, NB reported that Emmanuel shaded Liqourose’s raunchy photos that showed off her backside on social media.

Liquorose, who is in Mexico, delighted her fans with raunchy photos on her Instagram page where her not massive derriere was full display.

A few minutes after she shared the photo, Emmanuel shared a cryptic post on his Instagram story, which many believed was shading his ex-lover.

Although, Emmanuel denied shading Liquorose’s raunchy photos on social media. He clarified this after netizens knocked him for breaking their favourite’s heart.

According to Emmanuel, he wasn’t referring to Liquorose. He further begged netizens not to involve him in their online dama, stating he doesn’t have the strength.

A new video shared online by Liquorose revealed that she is not bothered by love, stating she is no longer falling in love but standing in love.

Liqourose also urged her fans to know who they fall in love with before committing to the relationship, as she had been left heartbroken.

Recalls that Liquorose and Emmanuel thrashed their relationship issues during the June Big Brother Naija, Shine Ya Eye, reunion show after the former revealed the shocking incidents that led to their separation.

Prior to the reunion show, there were speculations that Liquorose and Emmanuel were no longer an item. However, the news was later confirmed when they both asserted that they were done with each other.

It was reported that Emmanuel denied dating Liquorose. However, conversations between the duo during the show’s finale captured them clearing the air about their situationship.

According to Emmanuel, he never asked Liqourose out, and there was no agreement on their dating. However, Liquorose denied the statement, claimed their relationship was well-defined, and she was his girlfriend.

He said: “First of all I know for a fact that I never asked Rose out. We never agreed to the fact that we were dating. We were never boyfriend or girlfriend and we talked about the whole Dubai situation in which she claimed that I left her outside”.

Liquorose said: It was defined, I was his girlfriend.

Recalls that the controversy regarding Liquorose and Emmanuel’s Dubai saga was first reported by a controversial blog, Cutie, which alleged that the latter caught Emmanuel with a male partner.