Nollywood actor, John Ikechukwu Okafor popularly addressed as Mr Ibu who recently opened up about his life and career in a new interview has expressed his views about looking younger than his age. 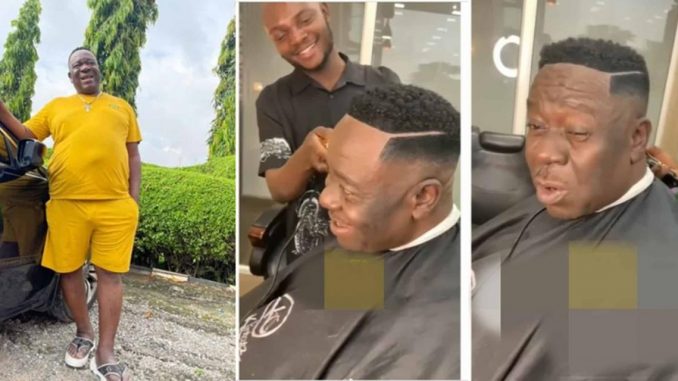 While having a haircut seesion, the comic actor refuted claims by his barber who hailed him for looking as young as 15 years after having a hair cut.

Refuting the claim, Mr Ibu said he does not want to look young rather he desires to look fresh.

‘Young no, Fresh good’, He told his barber. His reply caused an uproar as Nigerians took to the comment section to react.

misschidel
This man will always remain funny to me oo😂😂😂

aniscooser
Mr. Ibu is getting back stronger. He’s definitely going to recover fully to make us laugh again..

joelilyofficial
See as him fine

News reported that the past few weeks had been turbulent for the veteran who was hospitalized following food poisoning.

The actor who is now back on his feet received a warm welcome reception from his daughter.

Showing her father how much she loves him, she sang for him to celebrate his escape from death.

Kemi Filani news recalls Mr Ibu spoke out while in the hospital over his illness.

The actor was hospitalized after been poisoned at an event.

Speaking out, Mr Ibu said he was poisoned for the third time in about three years.

He made this known while speaking with Saturday Beats from his hospital bed, Mr Ibu said his enemies were after his life

He said, “I just got poisoned again. It seems my enemies are using me to rehearse (their powers). This time, I wasn’t poisoned in the village. I was poisoned in Abuja last week at an entertainment event. I really cannot explain how I was poisoned because it was a gathering if people, though it was not a big event”.