Nollywood actor Yomi Fabiyi has come under fire in the past few weeks following his stand on the ongoing rape case of his colleague Baba Ijesha and a 14-year-old girl.

The actor had slammed those condemning Baba Ijesha while urging to allow the law to have its due course. However, netizens blasted him for supporting the embattled actor even after he admitted to the crime.

READ ALSO:  “I will lead a protest for Princess’ arrest” Yomi Fabiyi continues to rant

Many social media users questioned Yomi’s reasoning on the ongoing rape case and engaging in a war of words with Iyabo Ojo.

However, a troll has slammed Yomi Fabiyi after his colleague Kunle Afod took to his Instagram page to celebrate him on his birthday.

Taking to the comment section after Kunle Afod penned down a birthday prayer for Yomi Fabiyi, an Instagram user identified as mzamusat trolled the celebrant, saying she hopes the new year changes his sense of reasoning.

realyomifabiyi wrote: Many Many thanks and I humbled senior man 👏

mzamusat wrote: I hope this new year adds to your sense of reasoning 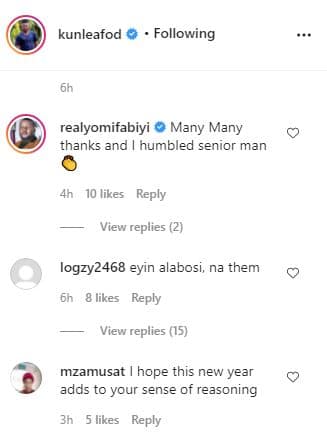