Member of DMW, Isreal has revealed the unknown about his boss, Davido and his baby mama, Chioma’s relationship.

NB recalls that a few months ago, the relationship between the singer and his third baby mama, Chioma hit the rocks over claims that David was dating another girl.

When Isreal was asked by a fan what was going on between Davido and Chioma, the manager replied by directing the question to God.

Isreal DMW reveals the unknown about Davido and Chioma’s relationship..

According to Isreal during a question and answer session on Instagram, Davido and Chioma’s relationship is in God’s hands, adding that the former lovers are both parents to their son.

Isreal wrote, “The relationship is for God to decide”. “They both have a child”

Speaking further, Isreal said he would prefer Davido to get married to Chioma out of all his baby mamas.

When asked what he likes about his boss, Davido, Isreal replied with;

“He doesn’t form. 80 per cent of people with him today are from the streets. He doesn’t do big men children association level. He would always check up on you as a poor man’s child.

He also disclosed that the reason David likes him is that he is hardworking, loyal, truthful. 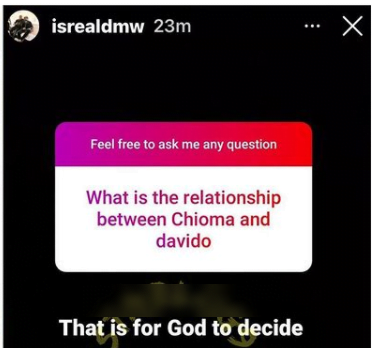 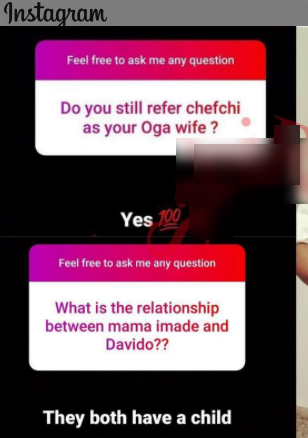 See how some social media users reacted to Isreal’s answers;

@obajay1245 wrote “You are wrong Oga Israel the real answer is. It’s a personal decision for the both of them to decide”

@chideraamakulo wrote “But chioma is a very fine girl oo.. and she has been enduring David since… it’s not easy to date a celeb.. because too much attention from other ladies.. u can go mad… women who deal with it are strong ladies.. Abeg mk I no too talk”

@kindnessfidelis wrote “It’s not bad if they’ve moved their separate ways. They are adults and knows what works best for them

Isreal DMW reveals the unknown about Davido and Chioma’s relationship..

Seyi Law, others console Davido over the death of his manager, Obama DMW