‘It is not easy’ – Kizz Daniel says, as he returns to smoking after quitting 3 months ago

Controversial Nigerian singer, Kizz Daniel has gone back to his old habit which he has a few months ago publicly denounced. 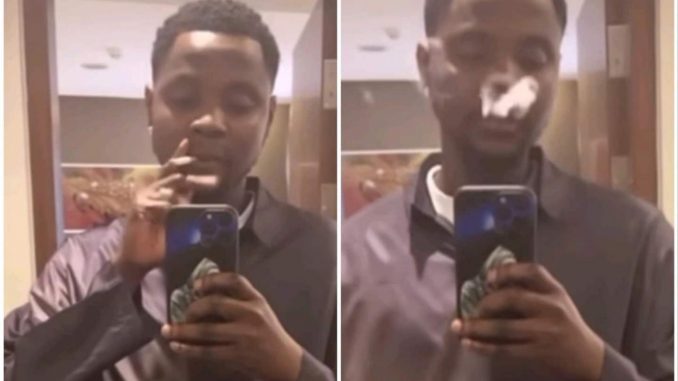 Sharing a video of himself smoking a stick of cigarette said “e no easy’.

Kizz Daniel had openly admitted his addiction to smoking, as well as condemned the act and vowed to stop.

Kizz Daniel also said that he decided to quit the addiction, because of his newborn kids, Jelani and Jalil.

Taking to his Instagram feed, on May 1, he emptied a pack of cigarettes and solemnly said, “To celebrate my birthday and for the sake of my kids, I quit smoking. Most of you that are still struggling with this addiction… it is not cool and it is not good. Trust me, it is not. May God save us all.”

Kizz Daniel, who broke out back in 2013 with his hit song dubbed, Woju, is one act of the most intriguing musicians of his generation.

After parting ways with his former G-worldwide label, also flipped on his label executive hat with his Flyboi Inc label, signing two other acts – the soundwhiz Philkeys, as well as the fast-rising singer Demmie Vee.

His current record, Buga (featuring Tekno), is also among the most listened to records in the country presently.

Finally, the D-Day for award-winning gospel singer Mercy Chinwo is here!!! The singer has been anxiously counting down to her big day since she got engaged in June.

Recalls that Mercy Chinwo stunned many when she announced her engagement to a Lagos Pastor, Pastor Blessed of Waterbrooks, where singer and actor Banky W also worship.

A delighted Mercy Chinwo shared the news online with a photoshoot of their moments together. She also captioned the photos with a heartwarming message.

She wrote: “I am blessed to be blessed with the blessed official. The thoughts of doing the next phase and the rest phase of my life with you makes the blessing more real… I love you Sweet”.

Ahead of her wedding, Mercy Chinwo hosted her friends to a beautiful themed bridal shower on Thursday, August 12th.

The singer beamed with joy as she enjoyed a fun time with her inner circles.

In a new update to her wedding festivities, the singer is currently shutting down Port Harcourt with her traditional wedding.

Port Harcourt city is on stand still for the gospel singer as she ties the knot traditionally with the love of her life.

Kizz Daniel returns to smoking after quitting 3 months ago