‘It’s actually no big deal for me to help others,’ DJ Cuppy reacts as Nigerians shower her with praises over her latest charity work

Nigerian female disc jockey and billionaire’s daughter Florence Otedola, known as DJ Cuppy, reacted after many people showered her with prayers and praises over her latest charity work.

News earlier reported that DJ Cuppy won the admiration of many Nigerians for her love for humanity, especially sponsoring a young lady to the school.

DJ Cuppy revealed that she met the lady, identified as Tobi, while working on her numerous photoshoots.

According to DJ Cuppy, Tobi was behind the scenes catering during her Pepsi photo shoot.

She wrote on her Instagram page, “I feel like God wanted me to meet Tobi so I could change her life…. She was behind the scenes catering during my Pepsi photo shoot. At 18 years old, her resilience after a such a life tragedy inspired me! Best believe Tobi is going to school, and the @CuppyFoundation will provide EVERY resource she needs until she graduates!”.

Since then, many Nigerians have stormed her social media page, appreciating and praising her for the kind gesture.

Reacting in a post via her Instagram story, DJ Cuppy said she’s grateful for the praise but advised people to normalise the act of kindness.

Cuppy said helping people was no big deal for her considering she had received help in most areas of her life.

The billionaire’s daughter added that much is also expected from whom much is given.

In her words: Got so many messages of praise and appreciation over my recent charity work… I’m grateful, but can we please normalise acts of kindness? 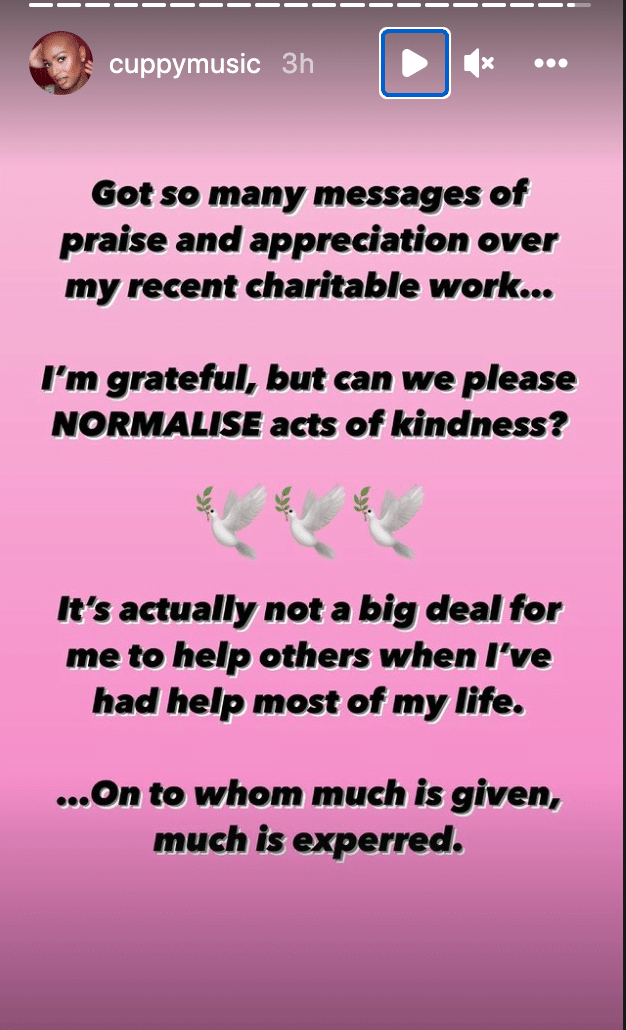 ‘It’s actually no big deal for me to help others,’ DJ Cuppy reacts as Nigerians shower her with praises over her latest charity work