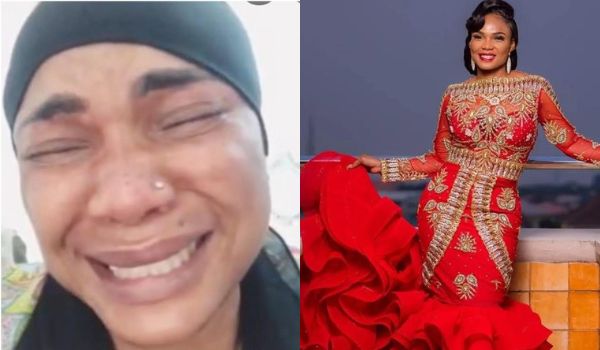 Nollywood actress, Iyabo Ojo has raised her concerns over her profile and biography on Wikipedia.

The divorced mother of two seeks help to edit and clarify the fact that her ex husband Mr. Ojo was never a Movie Marketer but a Clearing Agent, as wrongly stated on her Wikipedia page.

It is no longer news that Iyabo’s marriage to Mr. Ademidun Ojo packed up a long time ago, shortly after the birth of their two children.

“Abeg who handles this Wikipedia…. Bloggers my Ex husband, the father of my children Mr Ademidun Ojo was never a Movie Marketer ooooooooo, he was a CLEARING AGENT ……….,” She cried out on her verified Instagram page.

News had earlier reported when Iyabo Ojo called out her colleague Caroline Danjuma.

Ojo and Danjuma — now known as Caroline Hutchings — both featured on the Real Housewives of Lagos (RHOL), the reality TV show.

But it appears all is not well between the two film stars.

Caroline had posted to whom it may concern subtle shade on her Instagram page: “Out of trenches , but the trenches is yet to leave you .. love and light to your fav 😌.. inferiority complex is a mental disorder. QueenC.”

Unfortunately, many had thought the shade was for Laura Ikeji who is also part of Real Housewives of Lagos (RHOL), the reality TV show.

However, with Iyabo Ojo’s response, one could tell who owns Caroline’s message.

Iyabo Ojo wrote: “Caro! Caro!! Caro!! Your rudeness & disrespect that night was on a different level, you said I was insensitive towards your boyfriend’s bracelet lol … it’s a pity the camera can’t play out everything & the most happened off camera but deep down in your heart you know that I was one of the reasons you remained on the show….. even when you snitched on Toyin… showing me her WhatsApp messages to you about me, I still kept my cool and encouraged you to remain on the show…..Off camera you’re so rude & disrespectful even to the crew but I have always made excuses for you…, and I can see in your diary sessions, you are such an angel in Disguise….😂😅

Why didn’t you mention I returned your gift 🎁 the next day, you said I was insensitive about your boyfriend’s bracelet 🤣😂 bcos I asked if it was from your billionaire ex husband or current billionaire boyfriend lol that’s a girls talk no big deal darling & you know that, we’ve had worse talks than that….. the only issue was I asked on camera which I apologized immediately and we even laughed about it even tho the camera didn’t show that part, abi you forgot you told us that you wish you had stolen it for yourself & lied it went missing 🤣😂 anyways let’s leave the gbasgbos for reunion…’